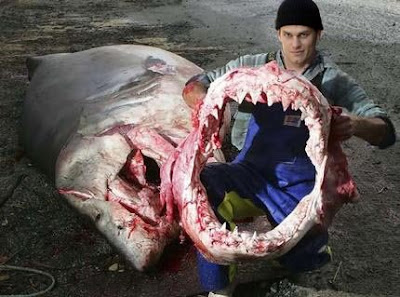 Sydney Morning Herald, Australia - A strong storm system that lashed the Northwest coast of Australia this week provided a moment of "sheer terror" for a local pair from Germany staying at the Four Seasons hotel in Cowaramup Bay, near Gracetown this morning.

The recently completed mega hotel in Oceanside, known for it's 3.7 million litre interactive salt water swimming pool, had an unexpected and unwelcome guest that arrived sometime during last evenings tempest.

When Dieter Franz and his wife got up early for a swim they saw something that chilled their bones, a 5 meter great white shark in the pool. "At first we did not know what it was, but then it turned and swam towards us at high speed, we thought this was not mentioned on the holiday brochure".

The shark was reported to police and sea rescue about 7:00am by hotel management who arrived on site and promptly shot the massive shark. "If we get a confirmed sighting of a large shark in the area then we just get on the water, patrol around, sometimes with boats moving around and that sort of thing," said police Superintendent Robbie Taylor. "This was something we never expected".

A local fisherman told police the a shark of similar size had followed his boat as he was leaving the bay the week prior. Police think the massive predator was somehow washed into the pool during the height of the storm and that the animal survived only to be discovered by the German tourists.

The shark was donated to a local research lab who took samples from the animal. The jaws were donated to the holiday makers by the hotel management. "We have one of the best holiday stories ever when we get home!"

The following Underwater Onion was brought to you by Shark Diver. Yes, it is the 1st of April what did you expect? 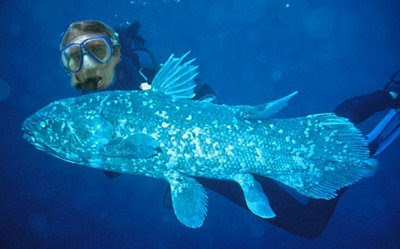 Stunning eco news this week from the MBSLS Blog of an actual Coelacanth discovered in Puget Sound:

Approximately 12 minutes into his swim, Powell spotted a meter long shape emerge from the Puget Sound murk. "At first I thought it was a cusk or perhaps a salmon," said Powell, "It might have even been a hake or cod. But imagine my shock to discover it was a coelacanth!"

Quick thinking and MacGyver-like ingenuity on Powell's part allowed him to quickly affix his underwater camera to a channel buoy using a piece of kelp. Herding the coelacanth into the frame, he managed to snap a picture (above) and secure conclusive evidence of his discovery.

"We swam together for at least five minutes," Powell is quoted saying in The Seattle Times, "It was one of the most transcendent moments of my life swimming alongside the bluish-gray fish. At one point, the coelacanth lifted one of it's paddle-like pectoral fin towards me and I instinctively reached out to it as well." 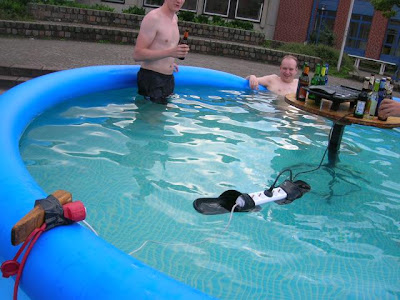 The group, comprised of 14 members, ranging from an ex SAS Marine, to a defrocked Catholic priest met this week for the "Guinness Book Extreme Pool-Off".

The Kiddie Poolers, formally Darwins Evolvers, held a 48 hour beer and bratwurst sit in where members enjoyed cases of beer and grilled bratwurst while giving interviews to the media.

"Some guys think they're all that diving with sharks", said David Pinerose, a metal fabricator and part time electrician, "but we think we got them beat".

Unfortunately the groups efforts to be recognised by Guinness were cut short when fifty thousand volts of power surged through their kiddie pool during hour 14 of their vigil, shorting out the entire county block. Local supporters described a horrific and chaotic scene. Group members were carted away by ambulance suffering from alcohol poisoning, hypothermia and shock. All are expected to make a full recovery and try again next year.

The following Underwater Onion was brought to you by Shark Diver. Most often "extreme" has a shelf life, happy April 1, 2009;)
Posted by Horizon Charters Guadalupe Cage Diving at 9:58 AM No comments: 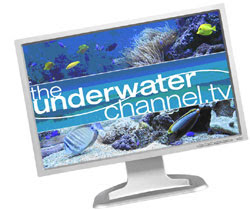 We have been watching the evolution of the Underwater Channel for a while now. Launched at the same time time as a few other online underwater sites, for a while there we were unsure of this online ventures future.

Oh, how a few months can change things.

For the past year we have been kvetching about the lack of pro shark, pro industry PSA's on the Internet. As it turns out they are on the Underwater Channel this month.

It would look like U.C has found it's stride and now has the content, and the direction, missing from other underwater media sites out there, Kudos.

Double Kudos for the cornucopia of shark conservation content this month.

Editors Note: An idea you guys you might want to take to heart. Make all your video content "link and embed" ready. A conservation video is only as good as the viewing numbers behind it.
Posted by Horizon Charters Guadalupe Cage Diving at 7:56 AM 2 comments: