Whoa, when did this get launched and why didn't we cover it?

Found on You Tube today and noticed that a mere 3,623 souls have been exposed to this first rate documentary on Holbox, Mexico. Feel free to pass this on to friends and family because Kip Evans and crew did a first rate job and you don't see storytelling like this too often:

The waters around Isla Holbox off Mexicos Yucatán Peninsula teem with plankton, a feast for giant whale sharks—10-meter giants that gather by the hundreds from June through September.

These super-sized, but toothless filter feeders are the core of a local tourism industry, but over-development could threaten this delicate balance. Dr. Sylvia Earle narrates. 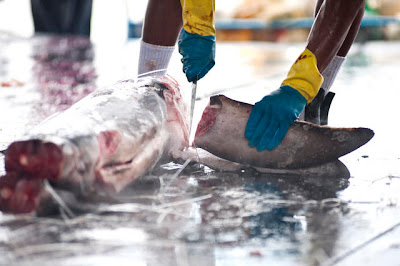 Got the following email this morning, one of many, from concerned members of the public and fans of shark conservation worldwide who, after reading our posts, contacted Senator Leland Yee for his stance on the proposed California anti-shark fin bill AB 376.

As we have long known blogging about the issues matters.

Kudos to all who sent a letter to Sen Yee. His sudden 72 hour reversal in position this week might have been due to your "collective" efforts.

California's Shark Fin Battle - "Culture" not on the table?

Being an outspoken South African, I am not too familiar with Californian legislation, nor "PC" and "Political Speak" - as I say what I mean, so your statement confuses me a tad.

Are you against shark finning and its consumption, and will you do everything in your power to stop this Marine Apocalypse, or do you think that its still OK in this day and age to consume non essential "food" with minimal nutritional value just because it is "cultural"?

If cultural is the operative word, then surely if your people can embrace modern technology [which they do with great gusto] why not remove an archaic social status anachronism and help save the planet?

I look forward to following your path.

To achieve the impossible it is precisely the unthinkable that must be thought and victory belongs to those that believe in it the most and believe in it the longest.
Posted by Horizon Charters Guadalupe Cage Diving at 3:45 PM No comments: 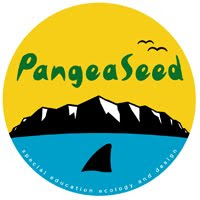 PangeaSeed, a Japan-based nonprofit conservation organization, is kicking off its inaugural Philippine shark study tour 26 March -10 April 2011. PangeaSeed in collaboration with the World Wildlife Fund (WWF) Philippines and the Thresher Shark Research & Conservation Project will host a not-for-profit international research expedition and cross-culture exchange. The event will aid in the gathering of information and ideas through community outreach and awareness activities to educate and develop a better understanding on the global need to protect sharks and our oceans.

With 70-100 million sharks slaughtered each year to satisfy the global demand for shark fin soup, considered an Asian delicacy, the expedition will focus on shark preservation and conservation. The United Nations released a report in the spring of 2010 stating that if the mass harvest of sharks continues, global shark populations will disappear in the next ten to twenty years. It is known that sharks now represent the largest number of threatened marine animals on the International Union for the Conservation of Nature (IUCN) Red List of threatened species. Furthermore, as an apex predator, sharks play one of the most important roles balancing the delicate ocean ecosystem. Today, over 1 billion people on the planet depend on the oceans as their main source of food and income – if that source disappears, imagine the problems we’ll face.

Tokyo-based PangeaSeed is a non-profit organization dedicated to educating and raising international understanding of the plight of sharks. PangeaSeed is the first and only organization in Japan to raise public awareness regarding shark conservation and preservation. “In collaboration with the World Wildlife Fund (WWF) in Donsol and The Thresher Shark Research & Conservation Project in Malapascua, our organization will host an international ecological awareness study tour in two parts 26 March -10 April, said Tre’ L. Packard, PangeaSeed managing director. “This pioneering tour is the first of its kind for Japan. With the kind and generous support of our sponsors including Aqua Lung scuba gear, Oxford Suites Makati & renowned global artist Brad Klausen, our group will continue its goal to break down the misconceptions of sharks and help to redirect attention to the urgent environmental needs surrounding our oceans.”

The first leg of the tour will guide a group of international attendees to assist PangeaSeed and WWF Donsol marine biologists with whale shark research and data collection. The data collected will be added to an international database shared by researchers and scientists worldwide. These efforts will help to develop a better understanding of the need to preserve and protect the threatened whale shark. Packard added, “Attendees will have the rare opportunity to be in the water with these magnificent animals and study them in their natural state.” Additionally, attendees will host a number of cultural exchange events at Donsol schools to educate students on their very unique and special responsibility of whale shark conservation, ocean preservation and how it can directly benefit the local population.

Posted by Horizon Charters Guadalupe Cage Diving at 7:35 AM No comments: