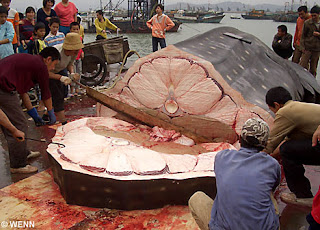 By now those-500 per day-of you who join us here at Underwater Thrills aka Shark Diver know that we are the last people on the planet to sit on the sidelines when news happen within the shark community.

Last year we were all over the place when it came to Internet giant's Yahoo! involvement with Alibaba.com

The issue was the selling of dried shark fins over the Internet and Yahoo!'s one billion dollar investment in Alibaba.com China-who continue to enable the sales of thousands of tons of dried shark fin each and every month. The math works out like this, for every ton of dried shark fin, the bloody harvest is upwards of 700 live sharks. It's ugly economics and even more wasteful than you can imagine when you realize 99% of the rest of the shark goes straight to the bottom of the ocean.

Shark Diver coined the term The New York Stock Exchange of Shark Fins for Alibaba.com and within a few weeks the term stuck.

Here's the latest news from the shark fin front and as can be imagined, the news is quite unimaginable:

BERLIN, May 22 (Reuters) - Overfishing partly caused by booming demand for shark fin soup, a delicacy in some Asian countries, is threatening the existence of 11 kinds of ocean sharks, an international study showed on Thursday.

The fish, often seen as ferocious sea predators, suffer from largely unregulated fishing for their valuable fins, said the report into 21 species of sharks and rays living in the open oceans.

The experts who wrote the study, organised by the International Union for Conservation of Nature, also urged governments to quickly impose catch limits.

"The traditional view of oceanic sharks and rays as fast and powerful too often leads to a misperception that they are resilient to fishing pressure," Sonja Fordham, report co-author and deputy head of the IUCN's shark specialist group, said.

Thresher sharks, silky sharks and the shortfin mako are all under threat, said the report, presented at a May 19-30 U.N. biodiversity conference in the city of Bonn.

The sharks, all "pelagic" or living in the open ocean, include large species such as the whale shark and great white shark. Although relatively few compared to coastal and deep sea sharks, a greater number of pelagic species is under threat.

"The increase in demand for shark fin soup in countries like China is a major driver of the problem," Fordham told Reuters, noting that growing affluence in China, where the soup is served as a treat at celebrations, is behind its increasing popularity.
Posted by Horizon Charters Guadalupe Cage Diving at 3:03 PM 2 comments: 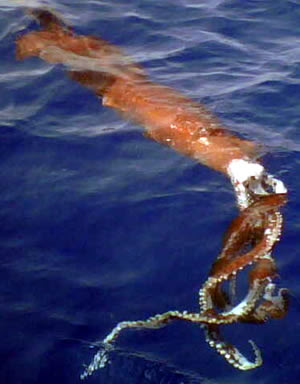 From the good folks over at the Underwater Times the following story of one of our favourite critters in the ocean, the squid.

This rather large 7 foot specimen was found by local fishermen in of all places the Cayman Islands.

George Town, Cayman Islands (May 21, 2008 15:40 EST) A rare squid found floating on the surface of the ocean about 5 miles south of Little Cayman this weekend has been positively identifed as Asperoteuthis.

Local fisherman Derren Burlington, who was taking part in the Brac Jackpot Fishing Tournament, discovered the 24lbs 4oz creature, which is over 7 feet (2.5m) long, on Saturday 18 May at around 9:00 am, and transported it to the Little Cayman Research Centre operated by the Central Caribbean Marine Institute (CCMI).

Dr. Clyde Roper, Emeritus Zoologist at the Smithsonian Institution, has confirmed that it is only the fourth specimen known in the entire Atlantic Ocean. He said all other specimens known of this species – a dozen or so – have been found in the Indo-Pacific waters.