Another day another marina. This time it’s Captain Slates dive center, home to passionate scuba divers from all over Florida and a marina dock that services it’s boats. As a potential docking point for fishing boats with access to the rich fishing grounds of Key Largo this is a great addition to the Shark-Free Marinas program.

Their decision to join up makes an obvious point: although shark fishing, or any fishing, may not be a regular source of commerce for the marina, they should still register with SFMI. Consider the no-smoking sign, we see it everywhere and register subconsciously that smoking is bad for our health and the well-being of people around us. It is therefore not socially acceptable in public places. I mean really, who these days would light up a cigarette in an elevator? Most likely no-one, but yet there is a sign to make sure.

Shark-Free Marinas is like that. It sets socially responsible standards of conduct when dealing with threatened species of shark. The more marinas that register the more it becomes socially accepted that killing sharks is not good for our environment.

That being said not every single marina will be Shark-Free. But if 1 in 10 allows caught sharks then policing standards and fishing codes becomes that much easier, and everyone wins.

Thanks to Captain Slate for setting a standard, check out their business here: www.captainslate.com

The venerable Field and Stream Magazine weighed in on the issue of a recently free gaffed breeding aged Mako shark in part due to coverage from Peter Thomas at the L.A Times:

Okay. I'm about to get a little rowdy. This week, someone forwarded me a news article about a 748-pound mako shark caught in South Florida. My initial thought was "there's been a lot bigger caught this year," but I checked it out anyway. After watching the video below and reading the story, I have decided that these guys deserve the title of "Most Amateur Idiots on the Water." See for yourself. They didn't "catch" anything. They free-gaffed a hot mako.

What surprises me most is how fast the local news jumped to glorify these guys. The line that sums up the mentality of this crew is when "fisherman" Jamie Bunn says, "I vividly remember the quote 'we might as well gaff this thing, someone's dying today.'" Dude, you are an inspiration to anglers everywhere. Good work. I'm not the only one who thinks this whole dog-and-pony show is a disgrace. And guess what? This may have been illegal.

From the Los Angles Times:

Florida anglers are being sharply criticized after apparently free-gaffing a 748-pound mako shark while fishing this week off South Florida...

Making note that no rods or reels appear to have been used in the capture of the mako, at least one shark conservation website claimed the anglers were in violation of state and federal law and implied it would follow through with authorities...

I've mentioned in the past that I'm very into shark fishing. Standards in practice when doing so is to have a rigged pitch-bait ready to go in case a fish shows up right behind the boat. This mako was eating a dead swordfish and these guys had plenty of stout rods onboard. So why not cut a piece of the sword, rig a rod, pitch it over and put your back into it for a couple hours?

Then my hat would have been off to you. Not too mention, free-gaffing a fish like that is asking for death, lost appendages, or at least some boat damage. Genius. -- JC

Editors Note: It is notable that Field and Stream Magazine and a series of fishing news outlets have all condemned this catch, showing industry leadership, kudos. 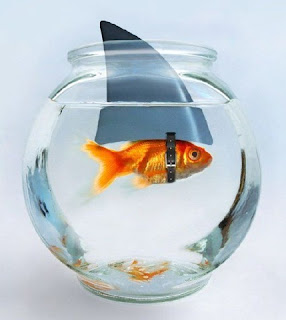 This mornings text message from Hawaii:

"FYI, The bill (banning commercial shark diving in Oahu) was thrown out and deferred to state."

Proving that Hawaii City Council members are not the same as those in Maui, Council members decided, after receiving an unprecedented amount of interest in the form of letters, emails, Op-Eds, and phone calls about commercial shark diving on Oahu to kill the issue before them and "punt it" back up to the state level and Rep Gene Wards office.

To refresh your memory the ongoing saga over the fate of commercial shark diving looks like this, dates are approximate:

4. May-2009 Long term U of H shark study by Carl Meyer et al shows sharks that are being interacted with 3 miles off shore are not habituating to vessels and following them back into shore as was charged by Rep Wards "Shark Taskforce." Wards office decides to ignore and discredit the study as bogus science, stirring up further controversy.

4. August-2009 Meetings are held with the commercial operators and Rep Gene Ward, pressure in the form of pro-shark diving business owners call Wards office, the theme of "it's the economy stupid" resonates.

5. August-2009 Maui City Council members watching Rep Gene Wards grandstanding, decide to ban shark diving. Shark diving that does not exists on Maui at this time. As one person states "they might as well ban time travel as well."

8. September-2009 Oahu City Council members propose bill, receive sharp backlash from community, they quickly realize this is a "no win" bill on many levels.

9. October-2009 Oahu City Council members throw bill out and refer the entire issue of commercial shark diving and the fate of 40,000 seasonal shark diving tourists back to the state.