Playboy and SharkDiver.com - The Video

A few years ago reporter Thayer Walker joined us at Isla Guadalupe, Mexico on assignment for both Playboy magazine and their online channel. What ensued was just plain shark diving fun with the world's top shark species the Great White.

While Thayer did not arrive with the bunnies we had hoped he would (you owe us Thayer) he did come away with a unique story told from the front lines of cage diving in Mexico. The shark behind him was none other than Shredder and any lesser reporter might have run away, not Thayer.

Behold professionalism in action and in the face of 1500lbs of raw muscle and show stealing shark talent.

Video shot by RTSea Productions, who else could get these shots?

"An in imaginable different kind of place where exclusivity and its good taste join hand in hand with the magic of a paradise-like scenery, awaits for you at Casa Caletas. Located on the beautiful and unexplored Gulf of Nicoya in Guanacaste, only five minutes from Playa Caletas airport and 30 minutes away from Punta Islita Airport, make Casa Caletas the perfect location for your leisure on the beautiful beaches of Coyote, Caletas, Manzanillo and Ma Pais."

But don't tell the local wildlife in the adjectent Caletas-Arío Refuge where accusations of toxic spraying and a recently surfaced video highlights the need for NGO's in the region to remain ever vigilant against damage to the refuge.

To celebrate close to a decade of on site operations at Isla Guadalupe we thought we would re run another of RTSea Productions on the great whites. This video is currently featured in Google Earth.

In 10 days time another Shark Diver expedition kicks off with 12 very excited divers.

They have no idea what they are in for.

Shark Week - You know it is refreshing, after two years of ranting, to actually like a show on Shark Week and this is one of this years stand outs. Is it possible to do mainstream shark productions without the hype?

By the way anyone who says that commercial shark diving is not good for sharks should watch this piece, this is pro shark, pro industry messaging of the highest order.

Posted by Horizon Charters Guadalupe Cage Diving at 11:57 AM No comments:

Opportunities for Shark Research, Conservation and Outreach work with the South African Shark Conservancy in 2010 and 2011 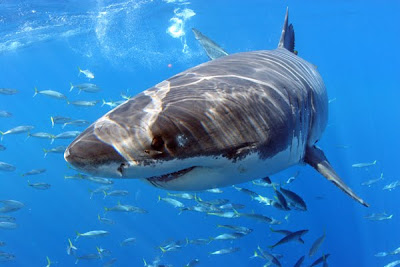 Opportunities for Shark Research, Conservation and Outreach work with the South African Shark Conservancy in 2010 and 2011.

Volunteer Positions are available to work with the South African Shark Conservancy commencing November 2010 and throughout 2011.

SASC is a non-profit organisation dedicated to promoting the conservation and sustainable utilisation of marine resources through research, education and outreach. Since its inception in 2007, SASC has developed partnerships with academic and conservation organisations around the globe, and has become well-known in South Africa for its inclusive and holistic approach to conservation and management initiatives.

SASC offers interns the opportunity to become involved in a unique and exciting approach to marine conservation. Our research and outreach projects are specifically designed to promote a holistic approach to conservation, working with various fishing sectors, research institutes and governmental organisations. Join our internship programme and gain valuable insight into the conservation management of sharks and other living marine resources.

SASC is looking for volunteers with a biological background or interest in shark biology and conservation for a period of one to three months commencing from November 2010 and throughout 2011. If you interested in joining our team and would like more details and an application, please send an email to tamzyn@sharkconservancy.org.

Please refer to our website www.sharkconservancy.org or join our Facebook group for more details about our current projects and events.

Posted by Horizon Charters Guadalupe Cage Diving at 11:20 AM No comments:

, August 6, 2010 – Oceana, the largest international organization focused solely on ocean conservation, announced today the launch of its 2010 that will assess the long-term impacts of the Deepwater Horizon oil spill. Oceana will use remotely operated vehicles (ROVs), specialized divers and satellite tags to investigate the effects of oil in the Gulf on coral, fish, shark and other marine species. Oceana will also document areas that may be in danger if the oil is captured by sea currents and transported towards southern or if another oil spill occurs in this area in the future. To date, an estimated 200 million gallons of oil has spilled into the Gulf since the explosion April 20, 2010.

For this research expedition, Oceana has chartered the Oceana Latitude, a 170 foot vessel capable of sailing in both shallow and deep waters, and adapted to serve as a diving platform. The expedition, led by oceanographer Xavier Pastor, vice president for Oceana Europe, will set sail from , Sunday, August 8, 2010.

“The Deepwater disaster is a horrible experiment on the ecosystem,” said Pastor. “Oceana’s expedition will help to answer important questions about what is happening under the water in the Gulf.”

Oceana’s scientists from both sides of the Atlantic will begin their work in the before sailing into the Gulf. The scientists, directed by Dr. Michael Hirshfield, senior vice president for North America and chief scientist at Oceana, will work with professional divers, underwater photographers and videographers as well as two ROVs (one capable of descending up to 3,280 feet and filming in high-definition) to analyze the magnitude of the oil spill and its affect on sensitive habitats and marine species. Oceana will also tag several shark species, including whale and hammerhead sharks, to monitor their migration patterns and study their ability to avoid oil contaminated areas as well as take samples of water, fish larvae, plankton and adult fish.

“Most of the public’s attention has been on the visible oil on the surface of the Gulf and the beaches and marshes,” said Dr. Hirshfield. “Oceana wants the public to understand the impacts of the unseen, underwater oil that is damaging marine wildlife and habitats in the Gulf and will likely continue to do so for years to come.”

Oceana’s Pacific science director Dr. Jeff Short, one of the world’s leading experts on oil spills that participated in the Exxon Valdez clean-up efforts, will use cutting-edge science to map the subsurface oil plume. Dr. Short has already travelled to the Gulf where he collected water samples.
Posted by Horizon Charters Guadalupe Cage Diving at 11:02 AM No comments: