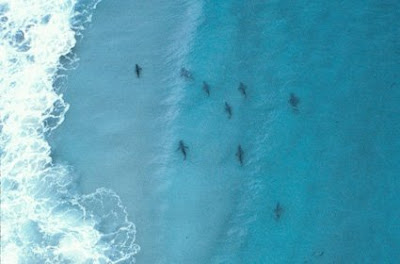 A horrific shark attack in Port St.John, South Africa has prompted calls for the installation of shark attack prevention facilities or shark nets.

The animal identified in this attack was a Zambezi or Bull shark, common to the area. South African authorities continue to be mired in a 1970's attitude towards their near shore sharks species regarding them as a "problem" with shark nets being a "solution".

Shark nets have been roundly condemned worldwide with many anti shark netting programs being likened to the clear cutting of rain forests. Sharks and many other animal species ranging from dolphin to whales are trapped by these 24/7 killers of wildlife.

Right now government officials in Port St.John are also wrestling with the cost of such a project without first taking lessons from other sites world wide where "solutions" to shark "problems" are less intrusive for sharks and in most cases less expensive for authorities:

1. California-Since the early 80's California has gone against the conventional wisdom of shark nets in high traffic areas where both White sharks and people mix. Instead California instituted protections for white sharks, and began a long term education of local populations towards these animals. Today, even after rare shark attacks on humans, the sharks are not demonized but understood to also have a natural stake in the waters as well as humans. Beaches with sharks feature year round warnings and the public is educated.

2. Australia-In Queensland, Australia where Box Jellyfish sometimes kill humans beach side playpens are set aside. These are often large net enclosures that allow swimmers full access to the ocean in set areas with life guards, ceding the natural ocean to wildlife. This would be the optimal solution for Port St.John's waters.

A combination of education, and set aside swimming zones that were netted would work in a cost effective manner for both the government of Port St.John and for oceanic wildlife.

Cost effective shark programs require a willingness to see sharks as proper stake holders in waters where humans and sharks mix. For too long many South African authorities have seen their sharks as "others" to be managed and eradicated. Let's look at this entire issue from the flip side and manage human populations first. A win for all.

We blogged about "newly discovered" Whale shark aggregations in the Gulf of Mexico back in August of 2008.

These unique and seasonal sites have long been known to the shark research community since 2002-but are just now getting the major media's attention.

Whale sharks represent "instant tourism" opportunities for many communities across the planet. The ease in which these animals allow for human interaction and the relative benign nature of these critters make for exciting shark encounters. For the still devastated Gulf Coast region local dive shops have been slow to look into "shark tourism gold" off their shores:

NEW ORLEANS — It was such an unusual sight that the commercial fishing crew in the northern Gulf of Mexico took an hour out of their work day to count the whale sharks swimming around and even rubbing their sandpaper-like backs against the boat.

The crew stopped at 44 to avoid double-counting the dark-bodied fish, some up to 50 feet long, opening and closing their wide mouths as they vacuumed in plankton, fish eggs or small fish southwest of Morgan City, La.

It was the largest sighting in a record year for a study of the world's largest fish that began in 2002 at the University of Southern Mississippi's Gulf Coast Research Laboratory in Ocean Springs, Miss.

Complete Story
Posted by Horizon Charters Guadalupe Cage Diving at 8:44 AM No comments:

Goblin Girl on... sharks in captivity!

Ok, I guess I SHOULD comment on the EU plan of action for sharks that was released on the 5th of February, but since both my hard drive and I decided to crash on the same day (no worries, it was just a cold for me and I had a recent back up of my hard drive so I didn’t loose that much data), I haven’t had the time or energy to go through it yet. I will return to it later.

So, my blog today will be about sharks in captivity. I have to admit that I have a very split opinion about this. Or maybe not… Let’s say I have an opinion. Here it is:

All my holidays I tend to plan so that I will either be able to swim with sharks or see them in nice aquariums.

But - there is always a but - I want the sharks to be healthy in the aquariums and I like diversity above ”mass consumption”.

I realize that any aquarium most likely is too small to be an ideal place for a shark. They should be allowed to swim freely in the ocean. Still, I think that letting people see sharks with their own eyes makes them more willing to help saving them. Sharks are not as easy to love as a seal pup or a smiling dolphin (I don’t know about that really – I have loved sharks ever since I could talk, but many people tell me about their fear of sharks). You have to work harder to make people as aware and fascinated as you are yourself. One way is to show them sharks on tv, an other to have them on display in aquariums.

But not all aquariums are ok. The film clips below were shot in Denmark. So far that is my favourite shark aquarium in the world. I guess the tank is a bit crowded, but the sharks look fine. No bruises or nasty wounds, no strange swimming patterns and a high diversity. I’ve been to several aquariums in the US where there have been lots of sharks – in fact, they have been lying in droves – but just 2 or 3 species. Those aquariums have not impressed me at all – although the sharks look ok. I don’t know if it’s because we in Scandinavia have to buy all our tropical sharks and ship them for lots of money to our aquariums – and therefore we can’t afford to overcrowd our tanks - whereas aquariums in Florida just go out with some fishing gear and takes as many sharks as they want. It could be that the sharks give birth to pups in captivity as well, but monocultures are boring and makes me a bit sick.

I went to a shark aqaurium in Germany. The tank was big and not too crowded with the four sandtigers that they had, but it also contained a poor lemon shark that was swimming in circles just above the floor. You could see a circle in the sand where it had been spinning around. That was very sad to see! Especially since I have since learned that you can cure this behavior with the correct medicine!

There is an other reason why that dive below was so excellent. As a biologist I know that nature is unpredictable. You might pay a lot of money to go very far away to end up with… scrubbing the boat from fishblood and not seeing a white shark for a whole day (that happend to me in South Africa in 1995). In an aquarium I know that I will have sharks around me – for sure! Also, since I took up diving I became what we in Sweden call an “ear child”. After a few dives I get ear infections and are not allowed to dive anymore for a while. If you spend a lot of money to go on a diving holiday you don’t want to get ill! Especially not before you have seen those sharks! Luckily I can snorkel ok and many sharks prefer that, but still there are some adventures where you will have to dive to see the sharks. The hammerheads off Cocos Islands are at the moment just a dream dive for me.

So, do I think that it is ok to have any specie of sharks in captivity? No I don’t think so. Some species adopt better than others to being held in captivity. That said, given the chance, I would gladly watch the captive whale sharks in Georgia, the white sharks that they have had in Monterey and the goblin sharks in Japan. I know it’s not politically correct, but if that is my best chance to see them “live” at all, I’m in.

In the best of worlds I would just have to grab my snorkel and jump into the water and be surrounded by sharks. For me here in Scandinavia, it isn’t as easy as that.

P.S. Since over 18 years I share my life with a pet tarantula. Yup, 18 years. In the wild, she would probably not have lasted more than a few years. Now we can look forward to say, 45 years together… Sometimes the sharks might be safer from predators – like humans - in aquariums… D.S.

Posted by Hajcharlott at 2:03 AM 3 comments: