Save Our Seas Deepwater Telemetry Project 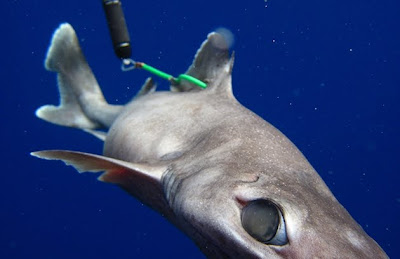 Scientist Edd Brooks with the Bahamas Shark Research and Conservation Program is a busy man.

His recent project could not be more timely with the recent push to make the whole of The Bahamas into a shark preserve.

However, the catches have been dominated by the cuban dogfish and the gulper shark.

Until the recent development of the X-Tag by Microwave Telemetry, Inc. there was not a PSAT small enough to deploy on a smaller species like the gulper sharks. The X-Tag weighing only 40g and pressure rated to 2500m is roughly half the size of the original archival pop-up tag which opens new possibilities for research on a variety of deep ocean sharks, many of which are under 1m in total length. Twelve more X-Tags are planned for deployment on the gulper sharks throughout the duration of the pilot project.

Complete Post.
Posted by Horizon Charters Guadalupe Cage Diving at 6:36 AM No comments: