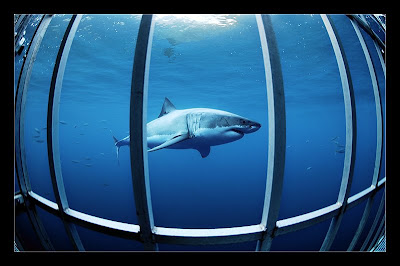 Both are solid, reputable commercial shark diving operators, and both are facing the chopping block unless our "industry" get's off it's collective ass and jumps in to the rescue.

It is rare to ask for help, it is industry leadership to offer it and see it through.

So, any takers out there? Is there one operator, dive group, website, chatroom, gear site, or individual that will take up the cause for these guys and push back against the tidal wave of anti-shark diving sentiment in Hawaii?

We had some ideas about what might be done immediately this week. It is not too late.

WAILUKU - Maui County has no tours available for visitors to plunge into the
ocean and watch sharks cruise by from the safety of submerged cages.

"I think we need to take precautions," he said, adding that he's concerned
that if shark tours become established in Maui County waters, then surfers,
swimmers and everyone else who enjoys the ocean could be endangered.

Nishiki said he particularly objects to outsiders coming to Maui to exploit
a business opportunity without regard for the lifestyle or safety of residents.

"All they're interested in is the big buck and that's it," he said Tuesday.

Nishiki said he's seeking a county ordinance that would ban shark tours in
Maui County. He said the county has the power to do so by blocking business
licenses for the activity.

The South Maui council member introduced the shark tour prohibition during a
meeting Tuesday. The matter was referred to the council's Economic
Development, Agriculture and Recreation Committee, chaired by Jo Anne Johnson.

Nishiki said that although he would like the state Legislature to pass a
ban, he doesn't know how long it will take for the state to take action.

He said he didn't want to see the Maui County Council pass only a resolution
because it would not have the force and effect of law.

Shark-viewing tours attract paying customers on Oahu's North Shore, but
there's a growing statewide movement to stop the tours from operating. Some
Native Hawaiians consider sharks to be ancestral gods, and they find it
offensive to have tourists feeding and viewing them for entertainment.

Surfers and environmentalists worry that shark tours might have the ocean
predators linking people with food, and scientists say luring sharks to
certain areas could disrupt the ecological balance in near-shore waters.
Posted by Horizon Charters Guadalupe Cage Diving at 7:51 PM 1 comment:

Kadavu, Fiji Islands – June 25, 2009 – The international Shark-Free Marina Initiative works with marinas, boaters and fishermen to develop policy designed to protect a vital component of the oceans health, our sharks.

The majority of shark species caught by recreational and sport anglers are currently listed by the IUCN as ‘Threatened’ (or worse) and each year an average of a ½ Million of these sharks are killed in the United States alone.

By encouraging non-lethal ‘catch-and-release’ shark fishing your patrons and clients can enjoy their sport while ensuring that shark populations are not further diminished. By promoting sustainable practices of ocean management we hope that sharks will be around to keep our oceans healthy for generations to come.

Currently we are working in Fiji at certifying all marinas and charter fishing boats as ‘Shark-Free Marinas’. Matava and Bite Me Gamefishing Charters was the first in Fiji to sign up and has agreed to promote, coordinate and distribute information about the Initiative. We hope that Fiji can be the first country to be proud to announce itself as a ‘Shark-Free Marinas’ Country!

Even if your facility is not frequented by shark fishermen, becoming a Shark-Free Marina is a valuable ‘green’ stamp and a promotional tool for your business.

You will receive a listing on the Shark-Free Marina website as well as the right to use the SFMI logo and signs for your own publicity. We are currently working on importing the stickers, posters and metal dock signs into Fiji for distribution to registered businesses, charter boats and marinas.

The SFMI website also has an education centre that we hope your clients will find useful, it includes tips on how to catch and release shark, a list of Endangered and Threatened species plus information on how they can help protect the ocean.

Neither Matava or SFMI is asking for your money, just your participation in saving the many valuable species of sharks in our local Fiji waters.

Please take the time to visit the SFMI website to find out more about how you can contribute to the future survival of our sharks while ensuring your business continues to thrive.

If I can be of any further assistance or help, just drop me a line.

Simple Registration
This is a simple and free process that ensures your patrons and customers know your business cares about the worldwide problem of shark over-fishing and that your marina or charter fishing boat will not contribute to the problem.

To register simply:
Register online at www.sharkfreemarinas.com
Display a ‘Shark-Free Marina’ sign on the marina premises or on the charter boat.

About Shark-Free Marina Initiative
The Shark-Free Marina Initiative has a singular purpose, to reduce worldwide shark mortality. We encourage shark conservation at sport fishing and resort marinas by prohibiting the landing of any shark at the participating marina. The SFMI works with marinas, fishermen and like minded non-profit groups to form community conscious policy and increase awareness of the need to protect our sharks, our ocean and our legacy.

Save a shark, eat something else - Op Ed 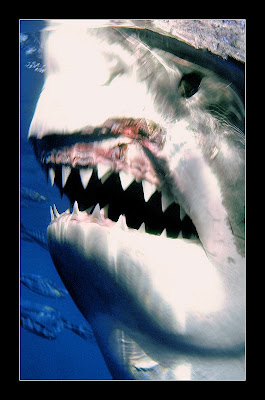 From the Shedd Aquarium this week you have to love reasoned, well written responses to shark propaganda:

As Director of Sustainable Practices at Shedd Aquarium, I am disappointed that for the second year in a row, shark is being served at Taste of Chicago.

Nearly 50 million sharks are killed each year for their fins, meat and cartilage, and another 50 million are accidentally caught by fishery nets and hooks intended for other species. This approximates to three sharks killed per second. A "red list" report from the International Union for Conservation of Nature (IUCN) found that 26 percent of all sharks and related species in the regional waters are threatened with extinction.

Avoiding shark meat and shark fin soup is one way we can help save shark populations worldwide, but we have much more work to do if these animals are still appearing on local plates.

Full Story
Posted by Horizon Charters Guadalupe Cage Diving at 10:10 AM No comments: 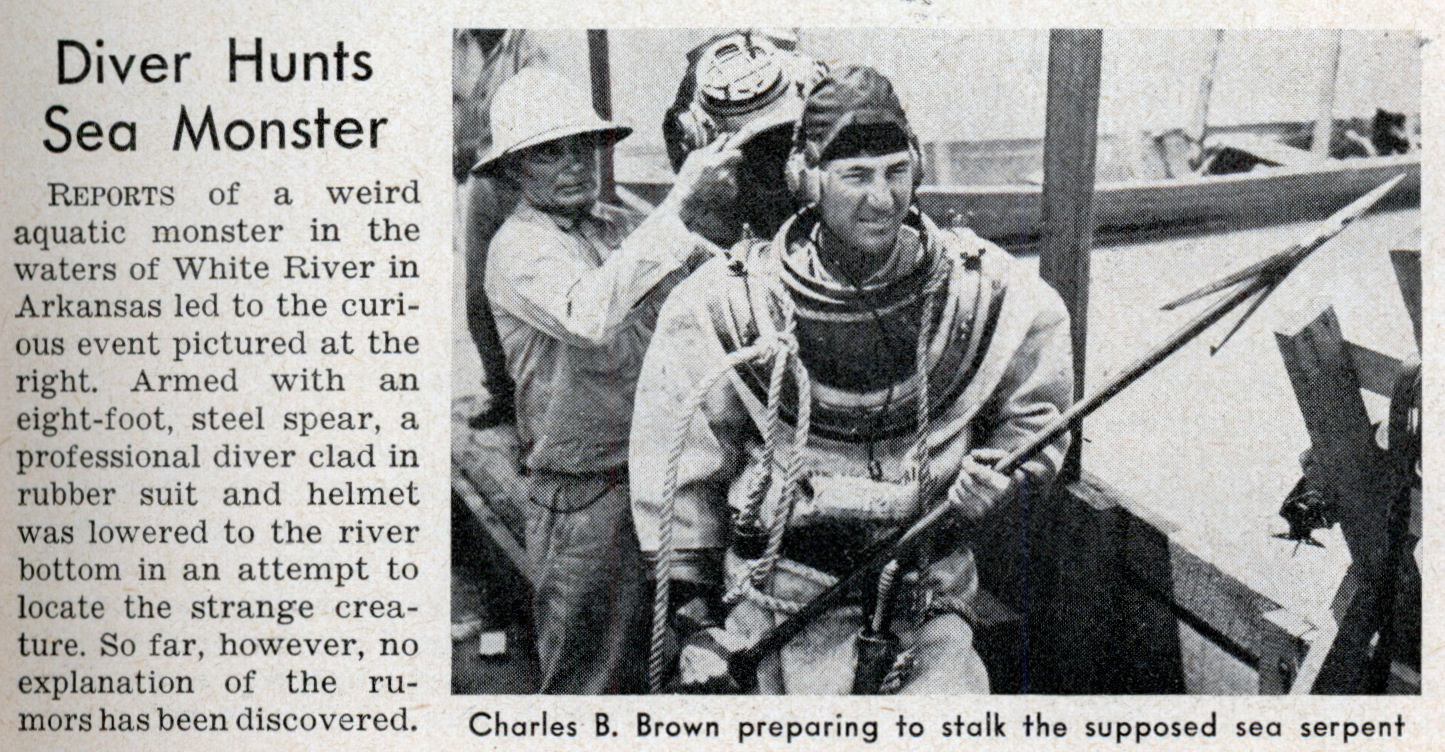 Proof positive that sea monsters exist at least in lake Okanagan, where the remains of a 1.3 meter "tailed critter"washed up on the shores recently.

If you're into sea monsters, and we are, here's the news with DNA samples and everything:

A mysterious looking body found along the shore of Okanagan Lake might be the remains of the legendary Ogopogo, an expert says.

Dan Poppoff found the 1.2-metre-long carcass last month while he was kayaking in the lake, close to the B.C. Interior city of Kelowna.

The Kelowna resident immediately called Arlene Gaal, who has written three books about the legendary sea creature and documented sightings of the Ogopogo for the last 30 years.

A day later, he sent her a photo of the carcass.

"I told him he had my attention right away," Gaal said.

She told him to store the body in the freezer and has arranged for two scientists to analyze DNA from the tail.

The carcass had a spinal cord and vertebrae, which made it one of the first interesting discoveries she's seen in the last 30 years.

"This is something very important to the scientific community. What we're looking at is an unidentified species and this might open the door to this mystery," she said.

Since 1978, about 1,000 sightings of the Ogopogo have been recorded in the Okanagan. Every year, at least five people come forward to say that they have seen the sea monster.

Two sightings have already been reported in 2009. Those who claim to have seen the animal say it resembles a whale in its size, the way it moves and the commotion it creates when it emerges from the water.

"We're looking at a definite large animal that is swimming in the Okanagan Lake. I'm sure of that," Gaal said.

Posted by Horizon Charters Guadalupe Cage Diving at 9:41 AM 1 comment: