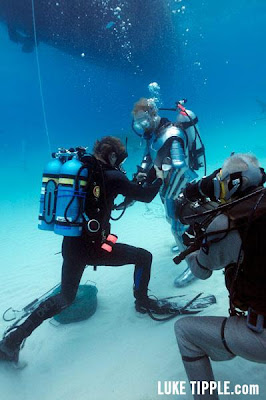 One look at this image has industry folks asking, "so what's with the suit of armor?"

This was part of our 2009 production with the Mythbusters at Tiger Beach, Bahamas for Shark Week.

The crew from Shark Diver was tapped to take Jamie and Adam, two of the nicest guys in television right now, down to The Beach to interact with sharks.

Part of that multi day production involved suiting up Adam for the shows intro segments. We thought it would be one of those unique production images that really captured the imagination - and it did.

The Mythbusters 2009 Shark Week appearance set new records for the Shark Week franchise and we were happy to be a big part of that shoot.

When it comes to sharks, why shoot in a sterile environment?

Of course safety is always our highest priority and we are happy to note that 12 years later we are proud of our 100% safety record with sharks and talent in the water.

2012 will see another series of productions around the world with sharks, so stay tuned if you happen to like sharks, we have some unique excitement coming your way.
Posted by Horizon Charters Guadalupe Cage Diving at 6:13 PM No comments: