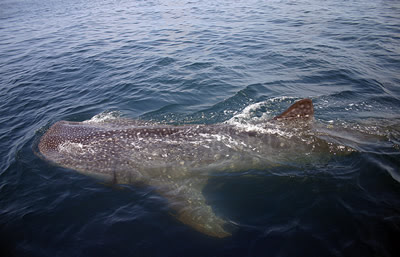 When the BP Gulf Oil Spill began, soon to become Americas biggest oil disaster, this blog quickly focused attention on a small research team out of the Gulf Coast Research Laboratory who had been studying Whale sharks in the region for the past several years.

Their research site turned out to be an oily ground zero.

Our coverage, with the help of several other blue bloggers, lead to timely mainstream media pieces that picked up this unfolding eco disaster and followed it to its frustrating conclusion.

National Geographic has a first rate follow up about the effects millions of gallons of spilled oil has had on these gentle giants in the region and is a must read:

Though much of the Gulf oil has disappeared from the surface, the spill isn't going away—and scientists are still trying to uncover the extent of its invisible effects on Gulf wildlife.

(Read about the Gulf oil spill in the October issue of National Geographic magazine.)

For instance, certain toxic ingredients of oil—and even the chemical dispersants used during the cleanup—could potentially cause long-term problems for whale sharks and many other species. Those may include compromised endocrine or immune response systems, scientists note. (See related blog: "Gulf Seafood With a Side of Oil Dispersant?")

Whale sharks filter a lot of water through their mouths and gills—almost 160,000 gallons (605,000 liters) of water an hour—as they feed on tiny plankton and fish. 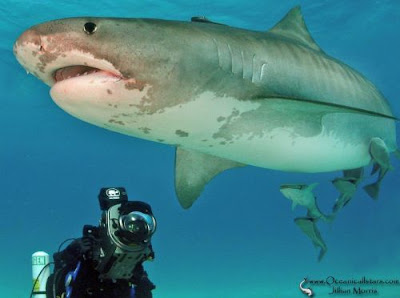 As a marine biologist, diver and videographer I have the good fortune of routinely travelling to the most wondrous locations. When I stop to think about where my favorite places are, I realize that many of them – the best places on the planet – are right here in the Bahamas.

These islands offer beauty and adventure – including a diverse range of shark encounter opportunities, such as the world famous Tiger Beach – which is a Mecca for shark enthusiasts. People travel from around the globe to catch a glimpse of the big beauties that inhabit the waters at Tiger Beach.

Film crews, television hosts and scientists alike revere this site as the ideal location to film, observe and conduct research. I have been blessed to spend quite a lot of time at this special place and I must confess that each time I visit it is completely different. Tiger Beach is really an irreplaceable, one-of-a-kind natural resource. Tiger sharks and lemon sharks are the primary species, but great hammerheads, Caribbean reef sharks and nurse sharks are also known to make appearances. Part of the excitement lies in never knowing what you might find when you slip beneath the surface!

As Jacques Cousteau astutely once said “people protect what they love,” and so I got involved with the Shark Free Marina Initiative because I love sharks. This campaign was designed to reduce the worldwide shark mortality rate by working with cooperating marinas. In the Shark Free Marina Initiative making the commitment means that no caught shark can be landed within the marina for any reason. There is no processing of meat, removal of the jaws of stringing up of the animals for photographs. Fishing for sharks within the participating marina is also prohibited. (This encourages fisherman to catch and release if they do insist on catching sharks at all.)

The program also works to teach proper techniques for catch and release, in order to increase the chance of survival for a caught shark. And while they have been historically, albeit incorrectly, perceived as monsters, sharks are extremely sensitive to being caught on a line. Just because they are released and not killed at the time of that release, does not guarantee they will survive at all. The Shark Free Marina Initiative also encourages fisherman to tag the animals with simple dart tags, as a means of increasing data collection.

Posted by Horizon Charters Guadalupe Cage Diving at 8:41 AM No comments: