That Travel Chick aka Fort Lauderdale's Amanda joined us at Guadalupe Island in 2010 for the ultimate shark encounter. This is Part Two in her ongoing series diving with great whites and Shark Diver.

We don’t actually leave the dock till well past midnight but it doesn’t really matter since we don’t get to Ensenada Mexico til 830am the next morning to go by customs and such and pick up an observer to make sure we don’t do anything illegal. Hehehehe.. The sleeping on the boat with the rocking was quite calming. I did have a few beers before hand so I was up a few times which isn’t easy when sleeping quarters are downstairs and bathrooms are up and down the back fo the boat. My bunkmate/roommate for the stay is Souxie, a Canadian from Alberta. Such a sweetheart and she was on this trip a year ago so that gives me more confidence as I picked the right vessel to hit my top bucket list item on.

I slept till about 6am. I had gone without sleep for 24+ hours so that still wasn’t enough. Once we left Ensenada though is when the waters started to get rough. I actually had a very large breakfast. Potatoes, pancakes and bacon. Probably not the best Idea I had but I didn’t realize I would get so sea sick. I was better when I was laying down so I skipped lunch and dinner since I didn’t want to bring it up again and slept from 3pm till 5am the next day. Waking up long enough to pee and back to sleep. Boat was rocking sooo much that I nearly rolled off and had to position my feet in the right areas. It was surprisingly comfy though. I did however get to see Blue Whales as we were about an hour or so out of Ensenada. They are pretty common to see there so it was a real treat. Ive never seen Blue Whales just Humpbacks and an Orca.

One of the funniest introductions was with Sue, when the boat rocked and she went flying right into me. I was up against the guard rail. I said “ gee.. buy me a drink first at least” and told her to sign my bruise since it was inevitable. It was a good laugh. She was a good sport. She has such a great laugh too.

Next - Day One White Sharks
Posted by Horizon Charters Guadalupe Cage Diving at 9:35 AM No comments:

Can tourism save sharks or can sharks save tourism? 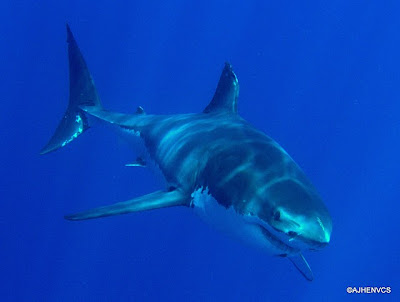 From the Dive Hub Blog this morning some smart industry analysis:

A recent study on the economic potential of shark tourism in Spain has found that this type of tourism supports hundreds of jobs and generates more than €17 million to the Canary Islands economy each year.

The study was carried out by researchers at the University of La Laguna and the New Economics Foundation. It suggests that there is potential for developing ecotourism around the species of sharks and rays found throughout Spanish waters but highlights the urgent need to protect these species. The findings suggest that the wonderful marine wildlife that exists close to the UK’s coastal communities could provide great benefits for local tourism and increased protection of the marine environment. The UK has 21 types of sharks and 16 of skates and rays in its waters, including the Basking Shark which is the world’s second largest fish and already supports wildlife tourism activity in the UK.

The research found that sharks and rays offer economic benefits through diving tourism and that approximately one-third of Canary Islands diving activity is linked to these species.

“Studies such as ours reveal that sharks offer economic benefits beyond food; left alive, many species can provide a source of long-term income and employment through diving tourism,” said Aniol Esteban, Head of Environmental Economics for the New Economics Foundation. “When all tourist expenditures are taken into account, we estimate that €17.7 million (£14.5 million) of the €97.2 million that divers bring to the Canary Islands can be specifically attributed to the presence of sharks and rays.’ These are significant amounts of money.

There are several other examples of shark dive tourism creating economic benefits, as well as conservation and marine habitat proetction. The Shark Reef marine reserve in Fiji is an example of this, as is the whaleshark watching industry at Ningaloo Reef in Western Australia. Many divers will visit specific areas just to catch a glimpse of a particular shark. From hammerheads and great whites to basking sharks and threshers, sharks have a powerful pull for dive tourism.

Complete Post.
Posted by Horizon Charters Guadalupe Cage Diving at 9:29 AM No comments: