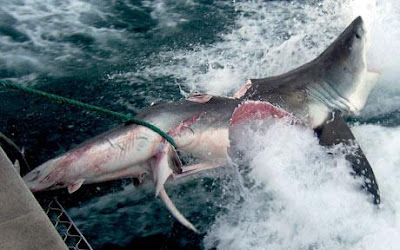 The news media is having a field day with the story of a 10 foot white shark with two giant bites out of its side, indicating that perhaps a much larger shark, as large as 20 feet might have been involved.

We took a look at the images this week and came to the conclusion "if" this animal was in fact 10 feet long, these bites could be the result of a very, very large white shark.

We decided to find out the truth and made a series of phone calls to various agencies in Australia today and here's what we know:

1. This is a real image, or so says The Queensland Primary Industries and Fisheries manager Tony Ham who told us "this is a confirmed 3.3 meters white shark, caught by our contractor, he measured the primary bite mark at 50 centimeters or twenty inches."

2. The sole contractor who catches sharks in the region has been doing so for Queensland Primary Industries and Fisheries since 1986.

3. Tony Hams team estimate from the 50 centimeter bite radius, the feeding shark was in the 5.2 meter range or 16-17 feet.

4. Samples were collected from the bitten shark. The shark was dumped at sea following standard protocol. The bites were so severe that the head actually fell off the animal during transit shortly after this image was shot.

5. These are not man made holes in the side of the shark according to Tony Ham, "it is not a faked photo, the photo is absolutely genuine."

Tony Ham went on to say after they released this image to the media and the estimated size of the feeding shark "the sharks size grew by a meter overnight."
Posted by Horizon Charters Guadalupe Cage Diving at 1:19 PM 4 comments: