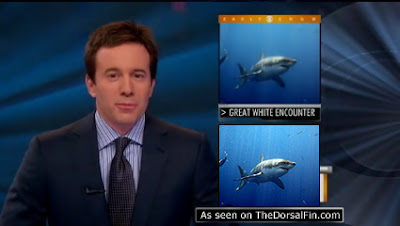 The Dorsal Fin Blog has arrived.

One of the true marks of any blue blogs ascendancy is recognition by the main stream media.

In this case CBS news.

This week CBS covered a non event with a local white shark in Australia, and used an image to set up their news piece with an image shot by George Probst at Isla Guadalupe several years ago.

George is the man behind The Dorsal Fin Blog.

Does this mean someone at CBS is following The Dorsal Fin Blog?

As long time shark bloggers ourselves, we can say with almost 100% certainty, yes, yes they are.

Now if they would only give him the blog credit for the image.

Posted by Horizon Charters Guadalupe Cage Diving at 8:22 AM No comments: 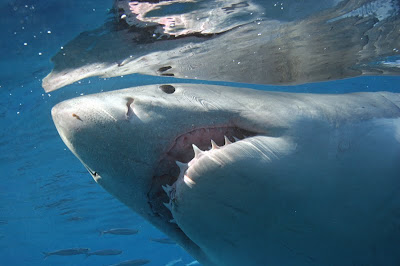 The Orange County Natural History Lecture Series will present a look at the Juvenile White Shark Research Project from 7 to 9 p.m. tonight at the Back Bay Science Center in Newport Beach.

The evening will include a presentation by Christopher G. Lowe, who will share some of his findings and insight into the biology and behavior of white sharks in southern California. Lowe and his team are collaborating with Monterey Bay Aquarium as part of the Juvenile white shark research program, according to a statement.

The team works with fishers who capture the sharks in their nets, assessing and tagging them for release.

“Their work has indicated that southern California is an important nursery ground for juvenile white sharks and that sharks spend their summers here close to beaches, but move to the warmer waters of Baja in the winter,” the release states.

Lowe has run the Shark Lab at California State University at Long Beach since 1998.

The Back Bay Science Center is located at 600 Shellmaker Road. The gates will open at 6:30 pm.