The crew from Shark Diver just about 1.5 months away from our first of many expeditions to Isla Guadalupe, Mexico this season. This is also the time of year we start getting excited phone calls from our divers seeking advice on everything from "bikini's vs one piece?" to "can I bring along a good 30 year old Scotch?"

Posted by Horizon Charters Guadalupe Cage Diving at 10:48 AM 3 comments:

A west coast white shark pup tagged and released earlier this year has been tracked into the Sea of Cortez.

As recent data sets would suggest the tag is now moving inland at a high rate of speed. Researchers say this is just preliminary data and that the shark is probably still in the water and doing fine.

Or...the tag is currently on the antenna of a fisherman's truck driving back to the coast. (click image for larger view)

Full news report here. As always we'll keep you updated. On an amusing side note this animal went from being a US citizen to a Mexican national in less than three weeks.
Posted by Horizon Charters Guadalupe Cage Diving at 10:32 AM No comments:

Famed oceans artist Robert Wyland will announce at a news conference tomorrow that he is withdrawing his iconic image from one of California's most popular specialty license plates.

The plates, sold in California, have raised an estimated 40 Million dollars for California's Coastal Commission.

Now Wayland wants 20% of those funds to go into his own foundation changing his original agreement with the state. The Cal Commission has said politely told him they need every single dollar here in the state. California, like most states, is suffering from a 20 billion dollar budget shortfall. Unfortunately there's an old saying out there:

The well known commercial artist has financial agreements with the following organizations including the Wyland Waikiki Hotel:

Perhaps leaving behind a solid legacy of "good will" with Californians would be a smart play. Someone should remind him of that.
Posted by Horizon Charters Guadalupe Cage Diving at 8:26 AM No comments: 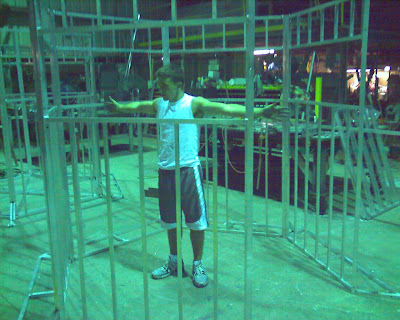 With just a few weeks to go until this years 2008 Shark Week we can begin to tell you about this springs shoot with the guys from Mythbusters.

Suffice to say SharkDivers was called upon to select the dive sites, wrangle the sharks, build the cage systems, to provide the right shark environment for Discovery Channels top grossing show hosts Adam and Jamie.

Underwater shark expert Luke Tipple was their go to guy for all things sharky this spring.

We can tell you both Jamie and Adam are two of the most original guys we have either met on and off camera and their entire crew were complete professionals. It's little wonder MythBusters has been the top rated show on Discovery and they were handed the coveted 2 hour show special this season.

Cable television's longest-running programming event will kick off Sunday, July 27 at 9PM ET/PT with the Mythbusters Shark Special. This two-hour special follows the MythBusters as they hit the deep blue to take a bite out of shark folklore. Among the myths tackled in this special: Are sharks repelled by magnets? Do dogs attract sharks? Do the vibrations caused by a flapping injured fish attract sharks?

Throughout the week, Discovery will run public-service announcements for the Ocean Conservancy, educating viewers about threats facing sharks.

Last year's Shark Week was watched by 27.2 million viewers, the most successful Shark Week to date.

Posted by Horizon Charters Guadalupe Cage Diving at 7:57 AM 1 comment: