The flip Side of the Coin-Da Sharks Take 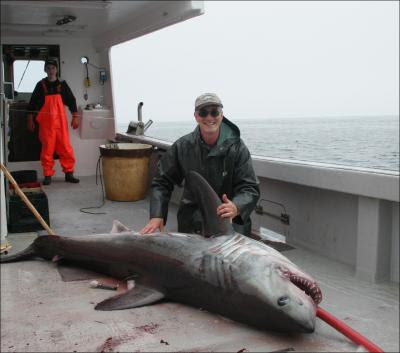 One of the reasons we love the Blog from Fiji. They make sense of things and cause you to scratch your head at least once or twice a week. That's a good thing people:

Under the title "Saving Sharks at the expense of Fishermen", here comes a real interesting article exploring the flip side of Shark Conservation, i.e. the fate of Shark fishermen who are being pushed out of business by new rules from the National Fisheries Management Services, a division of the US' NOAA.
The Atlantic Ocean Shark population overall has dropped 89 percent, with Tigers dropping by 97%, and Hammerheads, Duskies and Bulls 98%. That has prompted the Authorities to step in with some draconian fishing quotas.

Once they are fully implemented, the new rules could lead to the likely recovery of the population of Sandbar Sharks by 2070, of Porbeagles (like the one pictured above caught for "Science"; the water tube sticking out of his mouth is meant to ventilate it whilst it's being "worked on") ), within the next 100 years and of Dusky Sharks, within the next 100 to 400 years.

Yes you have read it correctly: up to 400 years! This is an indication of the present damage to stocks, but it is also due to the fact that Sharks are extremely slow breeders.

Obviously, the Shark fishing community cannot afford the luxury of waiting for so long and is now faced with immediate disaster, as the new quotas are too low to operate a vessel.

"But hey, wait a minute", I hear you say, "aren't these the very same people that have exterminated the stocks in the first place?"

Yes, they are, and if left to themselves, they would undoubtedly continue to reap and pillage until the very last stocks would be wiped out, along with the industry living off them. That's what fishermen seem to do time after time after time again.From that point of view, they should be left to go under, with nobody to blame but themselves for what appears to be their stupid and reckless greed.

You guessed it: likely nada de nada! Or better: as the stocks were falling, they may have started to collect data in order to properly document the threat in view of some future decision.
That's what Fisheries Biology has become all too often: collecting data in order to diligently document the decline, and all to often, the demise of a species. Caught between the interests of environmentalists who say they're not doing enough and the fishing lobby who fear for their livelihood, the Agencies all to often keep procrastinating until the situation has progressed well beyond its tipping point and everyone is faced with a catastrophe.

As an example, the new rules have taken years to document and one and a half years to "equitably" draft by consulting with all of the stakeholders - way too long for the stocks and the fishing industry alike.

Will anybody learn from this unholy and repetitive pattern? Maybe issue some pre-emptive injunction and only then go out and document it with the required data?

But hope, as they say, springs eternal.
Posted by Horizon Charters Guadalupe Cage Diving at 12:11 PM