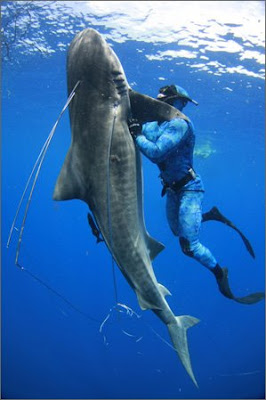 We were speaking with writer Thayer Walker this morning when he gave us the heads up on a new article he just completed for this months Outside Magazine called "Ready, Aim, Sushi".

The article takes an inside look at spearfishing in the Gulf of Mexico, and an unfortunate Tiger shark kill while he was reporting the story:

"Underwater filmmaker Ryan McInnis of InSea.TV accompanied spearfishermen Craig Clasen and Cameron Kirkconnell on recent hunts for tuna in the Gulf of Mexico. During the course of one dive, a Tiger shark charged McInnis. The following short (see website) includes the ensuing back and forth between the divers and the shark."

This morning we called Ryan McInnis to get his take. Our conversation with him revealed a level headed and consummate waterman with a long history in water with sharks. This was a conversation with a diver who was absolutely distraught about killing a Tiger shark.

Here's a quote from our conversation:

"I have been diving my whole life and this was unlike any shark experience I have ever had, or wish to have. All I had was my camera and no spear gun when the animal charged in, fins down, with eyes rolled back, it scared me to death. My buddies came over and saw the animal in an aggressive stance, our vessel was 100 meters away. It closed distance on all three of us and it quickly became evident that we were going to have to defend ourselves. Once the decision was made and the first shot was fired the true horror was now we had to kill it, you never leave a shark just wounded. I have seriously conflicted emotions now, the death of such a beautiful fish made me totally reevaluate spear fishing. This entire event was terribly unfortunate. I think this animal had never encountered humans because of the aggressive manner in which it charged in. We have seen resident sharks become acclimated to us, this animals was not acclimated, it was not going to back down. We postured at the shark trying to look bigger, we swam at the animal, and the last ditch effort was the shot.If getting out of the water was an option we would have taken it, we're not out here to kill sharks".

In the final summation killing any Tiger shark is a tragedy, will this article enrage some? Undoubtedly. Kudos to Ryan for his take on this and willingness to discuss the back story to the story. What we discovered is a man who's equally disturbed by what he saw as a "no win" for both him and the shark.

Very sad indeed...just watched episode three in which "Come face to face with a 12’ Tiger Shark that snuck up on me this summer in Louisiana, clean out your wetsuit" - in the episode Ryan also mentions that "he saw the last thing a freediver ever wants to see" referring to the Tiger Shark...makes me think how much experience these guys really have around sharks and there seems to be some fear...

Regardless - I would not want to be spearing around any shark for that matter - behaviors are completely different and more competitive...I still wonder if this could have been avoided.

Too sad a story to even consider. Those guys should have left the water rather than kill that shark!

I appreciate you guys voicing your opinions on the situation. And I thank Patrick for giving me the opportunity to comment on the incident before posting this.
Bottom line: there was over 60 years of ocean experience in the water between the 3 of us, all hold the respect of the global freediving/spearfishing community. If there were any other option it would have been taken, not just for reputations sake but for karma. Diving in North Carolina there isn't a day that goes by I'm not interacting with some species of elasmobranch.
I have respect for all sharks, fear is different. This was do or die.

I am not at all convinced that the spearfishing - filming team was facing a life or death situation. That reminds me of Robert Stewart who 'escaped death a few times' while filming "Sharkwater"...

This "it's either them or us" stuff sells all too well.

I agree with Mandy Easton: the guys should have left the water in order to leave the shark alone.

However, they opted to kill the shark - and instead of keeping this rather unfortunate incident for themselves, they simply could not resist the temptation of going public thus harming the sharks' already bad reputation AND cashing in $$$.

It is absolutely disgusting, and telling, to see the spearo handling the dead shark just to pose for the photographer!

This report has been published in several mass circulation papers in England and reinforces the general notion of the sharks that are out to "attack" humans.

So, please, Ryan, don't give us the insincere 'respect' for sharks crap when all you did was shamefully exploiting a situation that you and the others provoked.

Hi Thayer. Pretty snarky article, I've have objected to Outside's approach since their inception. Here they glorify the seal and the spearing of a large tiger. Diving daily in Hawaii for two years, the fish are gone to some degree, the spear fisher's are part of it. Being checked out by a big yella fin tuna is cool. Spearing a mega ponder is just stupid. Chumming all day, then spearing the tiger is pretty predictable. Outside and the seal are dumb reasons why the world is in the shape its in. Tuna is not gold.