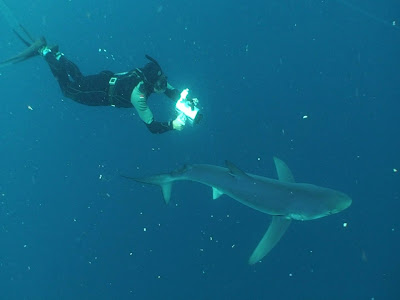 Editors Note: Rarely do we change blog entries. Today we did in the best interests of the industry.

The original post was about poor media handling, a subject we have been on more than once and once again faced with as images surfaced of industry members doing questionable things with sharks.

The owner of Nantucket Shark Diving, who we have been supportive of pulled the images today realizing his role in the global shark diving world was not just limited to Nantucket.

Our original post also had a small quote from a lengthy letter by the Humane Society USA which we will re-post here. As it turns out the Humane Society, in what can only be described as a "senior moment" sent a letter to the rabid anti-shark diving folks and politicians on both Maui and Oahu lending their weight against the entire commercial shark diving industry:


"Feeding wildlife of any species is detrimental to the species, as has
been demonstrated in instances as varied as feeding dolphins and
feeding bears. While I am sure that there are conscientious operators
who do not chum for/feed sharks, there are certainly instances in
which the ban is being violated. It is hard when a few rotten apples
spoil the whole barrel, but regulations are unfortunately directed to
the lowest common denominator (i.e., the need for automobile speed
regulations is not because most people are not sensible, it is because
some are reckless and there is a need to curb the behavior)."

For a conservation organization that works on shark issues, we're not sure how the Humane Society reconciles our industries efforts to preserve sharks via conservation efforts worldwide.

Instead here's a quick letter from NSD, who despite some early media malfunctions, have grown into one of the only operations on the East coast for great shark diving:

Nantucket Shark Divers is gearing up to become a full circle shark diving operation starting up in June of 2010. We will keep you updated with our progress. With an abundance of sharks in the area and warm offshore waters found within 10 miles of the shoreline this is a prime destination to dive with sharks on the Northeastern seaboard. Our operation specializes in taking: divers, researchers, topside viewers, and photographers out to view sharks using a respectful and humane approach to our expeditions. On a side note as a shark dive operator in the area I feel it is important to mention the recent media activity centered around the presence of great white sharks in Cape Cod waters in early September 2009.

I was very pleased to see the vast majority of legitimate media taken from the event was centered around the positives of having these sharks around our coastline. Not focusing on the minute dangers these sharks posed but the remarkable possibility to research and witness these endangered animals themselves. To me there seems to be a more positive outlook on sharks within the past few years, moving from a highly negative outlook toward a public interest and involvement through favored conservation by the public due to the dyer circumstances of sharks being brought to the public eye. I believe sharks are seen more as something to be protected and left alone in recent years than something that must be killed, and very deservedly so.

This has to be largely due to the amount of research and familiarity we have begun to see pertaining to these animals. The spectacle of white sharks around the beaches of Cape Cod brought on interviews about research and science, not danger and fear. Hundreds if not thousands of people drove to the beaches to catch a glimpse of the animals out of pure curiosity not horror, and most of the locals in the area simply replied "they've always been here" when asked about the sharks swimming just off the beaches. As an operator in the area I feel it is strongly important to point out that we do not condone any sort of behavior that interrupts the natural behavior of sharks. For us it is all about providing a way for the public to become knowledgeable about one of the worlds most endangered and critical animals by showing them the animals themselves. There is no room for irresponsible operators or actions with sharks as it does a huge disservice to the animals and businesses themselves.

The last thing these misunderstood animals needs is more media aimed to portray them in a negative light. Just for the record all of our shark diving occurs 10 or more miles from any beach, no fishing of any kind is allowed, and close contact with sharks is prohibited by divers. For more detailed information about our operation and what we can offer please visit www.brohrer.blogspot.com

Posted by Horizon Charters Guadalupe Cage Diving at 9:23 AM

I cannot begin to tell you how much I disagree with the statement by the HS!

... detrimental to the "SPECIES"????
As in: contributing to its extinction - or what? Gimme a break!

But apart from the obvious poor choice of words, it is just wrong to go ahead and make such generalist statements about feeding the "wildlife".

"Sharks" (whatever that may mean) are just not bears and all relevant research confirms unequivocally that feeding them has no bearing on their well being, their habitat or the safety of the aquatic recreationists.
Full stop.

The HS (and other "researchers") should ponder well before making gratuitous statements that are conveniently picked up by the anti-Shark lynch mob and used for their demagogic propaganda.

The big gorilla in the room is habitat degradation and the direct killing of the "wildlife" they purport to represent - not some totally innocuous "deviation" from what is perceived to be the "natural course of events".

Let's be clear about one fact: there isn't a single "pristine" ecosystem left anywhere and what is left requires urgent conservation and management measures - and yes, sometimes, that includes feeding the "wildlife" as the habitats are too degraded to provide for adequate sustenance and the stocks are too depleted to sustain the impact of a "natural" famine.

It's high time that conservationists get back on message and focus all their efforts on preserving what's left, instead harming each other with righteous and objectively stupid statements like the present one.

I would suggest HS get a new program and revise everything at this point.

The world has changed and is changing very quickly, too quickly to hold on to desperate 1970's eco thinking.

She does make one point I agree with. If operators fail to police themselves, government must step in.

90% of the excruciatingly poor shark media that came out of Hawaii over the past 8 years has come back to haunt them.

They will survive this, just barely, but another lesson learned for others who seem to think they are above it all.

The anti-shark lobby is alive, well, and spoiling for another fight.