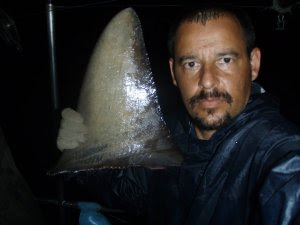 For the past few years the conservation world has been missing a key element in the shark fin story, first person and eye witness accounts of the ongoing shark slaughter.

We follow a number of blogs on the Internet and the Costa Rican Conservation Network is one of them.

Allan is a Pretoma marine researcher, after a week long odyssey with long liners in the region he comes back with this bloody, if not completely credible, first person report.

Not only is shark finning as bad as reported in the region but the "choicest fins" are in fact the most bizarre with the the caudal fin, or “timon” in Spanish being the most sought after fins on the Costa Rican market right now.

"In my last trip on the open ocean I observed that the shark finning problem is probably worse then ever”, he said. ”One species in particular, scalloped hammerheads (Sphyrna lewini) are being targeted the most. You can’t sell its meat back in port, but its fins are well received.”

Kudos to the entire team for this post. More about the CRCN here.
Posted by Horizon Charters Guadalupe Cage Diving at 10:46 AM

Amazing and sad at the same time good work.