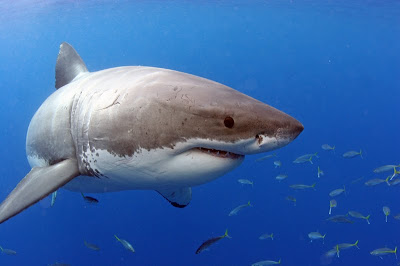 Having spent 15 days at Stewart Island this year in the company of these critters I can say this is amazing news indeed.


The deep-sea secrets of the great white shark are being revealed
through a tagging system which has tracked one predator more than 1100
kilometres in 11 days.

Grim, a 2.8-metre great white shark, is the first of its kind to be
successfully tagged with a hi-tech GPS system. A Department of
Conservation team placed the tag on him off Stewart Island in March.

Late last month he decided to abandon his island lifestyle, bolting
into the South Pacific.

Marine biologist Clinton Duffy, who has led the team on Stewart Island
for the past five years, said the data being received from Grim's
transponder was amazing.

Grim became the second shark to be fixed with a SPOT5 tag after the
first attempt in 2007 failed after 18 days.

The tag is drilled into the first dorsal fin and provides accurate
position data to 350m every time it breaks the surface.

Duffy said Grim left Stewart Island late on May 28 and by yesterday
had travelled 1147km, putting him 350km northeast of the Chatham
Islands.

Grim was travelling much farther east than other sharks studied.

While the reason for that remained unknown, the data being received
from the tag meant theories about the great white's migration habits
could be confirmed or thrown out, Duffy said.

"He's certainly gone a long way east compared to our other sharks and
what we don't know is if he's going to turn around out there."

The data would also allow the team to study where the shark stopped on
its trip, its speed and its feeding habits, he said.

During the research 46 individual sharks have been identified at
Stewart Island.

Many of these were tagged with $5000 pop-up archival tags that are
attached to the shark using a long pole.

The chip stores data on depth, temperature and light levels and is
useful for long-distance mapping, but cannot record precise locations.
Posted by Horizon Charters Guadalupe Cage Diving at 11:47 AM