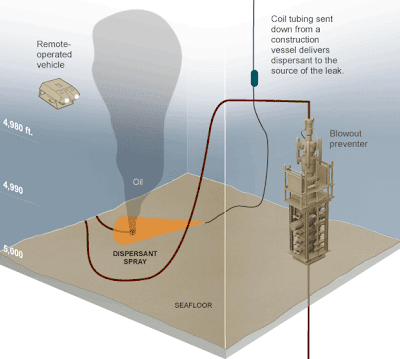 British Petroleum's CEO Tony Hayward, when not stuffing size 12 Gucci loafers into his mouth at every press opportunity, says there are no sub surface oil plumes.

In the middle of this "debate" is NOAA, a government agency tasked with all things ocean.

Are you kidding me?

Sub surface oil plumes are part of BP's ongoing strategy, we covered this many weeks ago. Anyone except NOAA it seems, can understand why BP would prefer oil to remain suspended at depth. It is also the reason why BP is ignoring EPA directives to stop using COREXIT, their dispersant of choice in the region.

With a disaster of this magnitude you have to wonder why NOAA is ignoring respected Gulf researchers, working the media cycle in tandem with BP, and basically making a laughing stock of the agency?
Posted by Horizon Charters Guadalupe Cage Diving at 7:35 AM