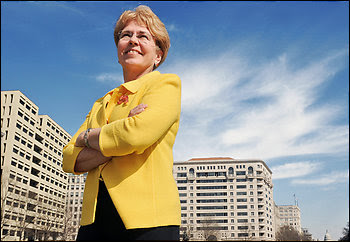 This woman is menace to your oceans.

As NOAA's Director during Americas foremost ecological disaster she proudly wore, and then hid behind, a pair of glided policy handcuffs of her own design as if they were some sort of magic talisman.

Life is defined by moments of crises when people in positions of power are called upon to act beyond their constraints, rise above them, and lead.

Not so for Ms.Jane Lubchenco who, during the Gulf Oil Disaster misrepresented facts, stalled, berated independent researchers, and towed the BP corporate line whenever and wherever possible.

From NOAA's low ball estimates on oil leaking into the Gulf, 5000 barrels a day, to outright data suppression, her time as NOAA's Chief demonstrated a lack of will, lack of understanding, and a not so carefully concealed Academic C-Y-A Dance that all but shocked anyone who has been monitoring the events as they unfolded.

Her tenure at the job during and after the crises has been piss poor at best, at worst may well let BP walk away from responsibility to existing oil still in the Gulf, oil her offices say does not exist.

As Hurricane Katrina was to Brownie Brown, another next to useless public servant, Ms.Lubchenco should pack her Disney lunch box with the picture of Ariel on it and begone from Washington, begone from ocean policy, and begone from any position that requires her to be in leadership.

Posted by Horizon Charters Guadalupe Cage Diving at 11:22 AM