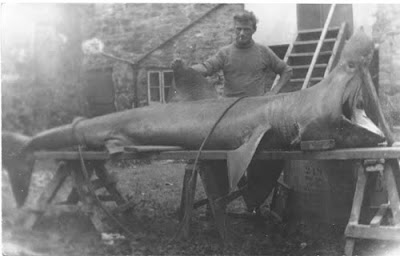 From the RTSea Blog today, Baskers off the California coast have now been declared by NOAA.

So what does this mean?

NOAA, the U.S. National Oceanographic and Atmospheric Administration, took a slightly unusual step by declaring the eastern North Pacific's basking shark a "species of concern." While it sounds a bit like a suspect in an unsolved homicide, what the designation actually does is recognize that the basking sharks that migrate along the coast from Canada to the central coast of California are not recovering in numbers as expected since the taking of basking sharks commercially was curtailed in the 1970s.

The importance of a government scientific agency taking a step like this is that it essentially greases the wheels for marine scientists to consider the basking shark as a study subject. With NOAA's acknowledged concern, the designation can assist scientists in seeking funding for research projects.