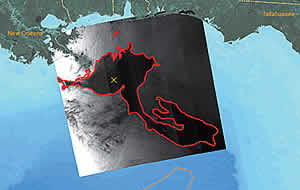 Northeast and northwest spawning grounds for Bluefin tuna in the Gulf were at ground zero for Americas worst oil spill on record.

And the fallout is just beginning.

PARIS, France -- The Gulf of Mexico oil spill couldn't have occurred at a worse time for bluefin tuna: they had come to the area – a major spawning ground – to produce offspring. Satellites are helping assess the damage from the disaster on the fish's spawning habitat.

The majestic Atlantic bluefin tuna, among the largest fish able to grow the size of a Volkswagen Beetle, come to the Gulf yearly from January to June. Their peak spawning time in the Gulf is April and May – just when some 10 million litres of oil a day was pouring into the water following the explosion of the Deepwater Horizon rig on 20 April.

The commercially valuable fish spawn in surface waters, with females releasing eggs and males following behind to fertilize them. The presence of surface oil could harm eggs, larvae and even adults. With the western Atlantic tuna population's spawning stock declining by 82% over the last 30 years, it is imperative they spawn without disturbance.