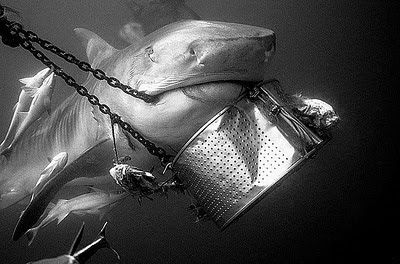 When a series of starkly shocking industry images recently surfaced of a well known commercial shark diving operation in S.A, the ensuing industry backlash was both unnecessary, ugly, and tribal.

We posted our thoughts on the ensuing fallout here and were happy to discover well known journalist, writer and photographer, Glenn Ashton wading into this issue with an open letter to S.A dive operators.

Glenns letter is not only great industry thought, it is real leadership. Kudos to Glenn for not only taking the time to review this industry issue from all sides, but to distill it down to the fundamentals.

Are we as an industry ready to embrace standardized practices, both baiting and film and television, that benefit our primary clients, the sharks, first and foremost?

As a journalist and observer to the debate about best practices concerning shark attraction methods and the shortcomings of some methods, it is clear that the issues that have been raised are extremely important to deal with in order to ensure that our South African shark diving industry has a reputation that we can indeed be proud of.

There is nothing wrong with generating profit from shark diving. The dive industry is a powerful tool to assist in protecting sharks, in getting the public to understand them and in taking their plight to a wider audience.

Public oversight has assisted in improving practices in all aspects of the shark dive industry and indeed in all related aspects of human/ shark interaction. This mirrors the experiences of other conservation practices in other nature conservation fields which have often learned and advanced themselves through outside pressure.

However it serves nobody when baseless allegations are thrown around, when issues become personalised for reasons that are completely unrelated to the issues at hand and when discussions that are aimed at improving industry practices are marginalised because of illogical and ill informed inputs.

The same goes for shark diving on the Aliwal shoals and other offshore shark diving spots. The methods used to attract sharks have been shown to be damaging to sharks and yet those who rely on these flawed methods have denied any cause for concern and have instead attempted to sidetrack and personalise the discussion and debate. Others have worked hard to clean up their acts and have listened to outside inputs.

Denial of any problems in how sharks are chummed and attracted obviously serves nobody except the denier and it does not move the debate forward. As a journalist and someone involved in covering environmental management in South Africa I am quite prepared to go out and expose any dangerous or damaging practices to the widest possible audience so that things do change, through either the force of public opinion or the force of law. Both are equally relevant in this case.

It would however be far more beneficial for all of the role players in this debate, especially the shark dive charterers who have been criticised for poor baiting practices, to play a far more mature and responsible role in this discussion. There clearly are operators who have tried different methods of baiting which appear to be non damaging to sharks - through encasing cables and chains in polypropylene pipe - which is rigid and extremely tough and non damaging to shark mouths, compared to exposed cables and chains. Why can this and other useful discoveries not be made best practice?

An industry standard should be agreed upon and any parties who continue to practice dangerous methods of attracting sharks, just as those who do not properly care for, or endanger their divers and customers, or who follow other dangerous practice, must be sanctioned and isolated, if shown to be intransigent in the face of changing toward best practice behaviour.

If we wish to have an industry that is good for tourism and for our image as a leading nature and eco-tourism destination then we must pursue best practice in all aspects of environmental tourism in South Africa. If we wish to be the world leaders in this field, that we claim to be, then we must behave like world leaders. Accordingly the industry must support a move toward transparency and best practice and engage with each other in a constructive way that promotes mutual interests

The alternative is to identify and deal with those who refuse to play the game according to mutually agreed rules and isolate them utterly. The choices are simple. So lets rather consider moving on toward finalising what is essentially a straightforward procedure.

A useful first step would be to invite all shark tourism operators to sit down around a table, at a shark tourism conference, of SA operators, and start to hack out the issues, formalise them and put these steps into practice. SA tourism and other regional tourism boards would be supportive - we all know that the industry brings in significant money. Any other relevant parties must also come aboard, including government (Department of Agriculture, Forestry and Fisheries, and Dept of Environment and Water, and possibly Tourism and also the Shark Board but there may be ambivalence about this).

It would just take a few champions of the cause, from within the industry, to drive this. They could reap huge benefits by being shown to lead the way toward the most progressive and ecologically sound practices, and could accordingly advertise along these lines.

This should ideally happen from within the industry - self regulation is always preferable to having regulations imposed on you. But if nothing happens then imposition of tighter regulations may just follow.