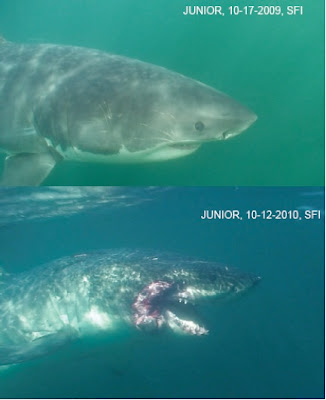 The following images are as shocking as they are hard to comprehend. The damage to this shark is simply stunning.

They are purported to be "before and after" images of a protected white shark that was mauled at the Farallone islands in 2009.

A shark by the name of Junior.

The shark was badly hooked by a hybrid shark research/film crew in the fall of 2009. The hook was set so badly in the animal that a pair of industrial bolt cutters had to be pushed through the gills of the shark to cut the hook.

Two thirds of the hook was left inside the animal.

If this is in fact the same animal and these images can be verified, it is clear evidence that this brand of hybrid film and television shark research should be banned from the Sanctuary.

Maria Brown, Farallones Sanctuary Manager, gave the following assessment in 2009 of this kind of research:

This blog will be following up on the series of recent images we have uncovered featuring an emaciated white shark with what looks like a tumor on the side of it's mouth and will be reporting the details as they can be verified.