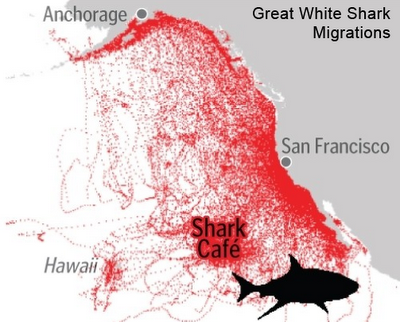 The RTSea Blog has full coverage on TOPP (Tagging of Pacific Predators) findings this morning.

If you were curious about Pacific white shark movement data here it is.

In California, many people involved in ocean conservation are familiar with the ground-breaking work of Dr. Barbara Block and the program she started, TOPP (Tagging of Pacific Predators). Using various types of telemetry and satellite tags, the TOPP crew has tagged a variety of ocean animals, from sharks to tuna, to turtles and more. Doing so has enabled them to determine many of the key migration routes these predators take - quite often of a seasonal nature, traveling great distances back and forth between key locations year after year.

After 10 years of tracking using over 4,000 tags and accumulating data from over 23 different species, TOPP has released a final report of its findings in conjunction with the Census for Marine Life, published online in Nature. The report shows that migration patterns play a very crucial role in the lives of many ocean predators. Writing in the Washington Post, Julie Eilperin repeated TOPP's description of the eastern Pacific Ocean as being akin to Africa’s Serengeti, teeming with wildlife and crisscrossed by migration corridors used by sharks and seabirds. Two currents play a key role in the migrations: the California Current - which stretches from western Canada all the way south to Mexico - and the North Pacific Transition Zone - which travels east and west between the sub-arctic and subtropical water.