Are These the Killer Seychelle White Sharks? 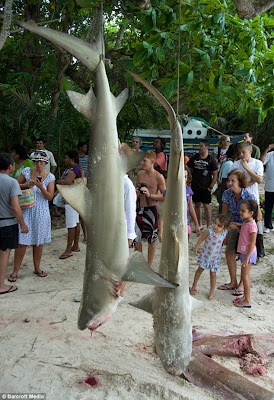 The answer is no. These are Lemon sharks (Negaprion brevirostris) fish eaters.

But that has not stopped the Seychelles gov from engaging in a wide spread Jaws style shark hunt in an attempt to prove to their tourism base that they do not have a "shark problem."

To the Seychelles credit and a country that depends of 50% of it's GDP to tourism dollars they had to do something, but an old school shark hunt targeting every shark species within 20 miles of an attack site?

That's not in keeping with modern tourism values, nor does it fully recognize the intelligence of today's tourist who understands more about sharks now than 20 years ago when a full court shark hunt was de rigueur.

The Seychelles even went to the extreme lengths to hire several South African Shark Mercenaries to hunt down their Killer Sharks.

What has transpired over the past several weeks in the Seychelles has been a farce.

At first this was not a shark attack, then it was deemed a shark attack, then the animal without any scientific proof was identified as "not a local animal." From there various sources within the Seychelles gov said this was a white shark, again no proof was offered but it worked nicely with the desperate storyline that the Seychelles did not have sharks in its waters.

Along with this weeks Lemon shark haul, Seychelles shark hunters also came back into port with two large Tigers, so much for the Seychelles storyline that they don't have sharks in their waters.

It's evident that the Seychelles have no clue how to deal with their sharks, even though these animals have been living in a peaceful coexistence with swimmers for the past 30 tourism filled decades.

At this point all that can be done is to watch the unfolding disaster and plan for the next gov reaction to a shark attack. We can learn from the Seychelles media disaster as a case study on how not to react and deal with the aftermath of a shark attack.

While shark attacks are unfortunate, and deaths from shark attacks tragic, they remain rare events and we can do a lot better than South African Shark Mercenaries, and media reports that attribute attacks to species that most likely no where in the region at the time of the event.

Posted by Horizon Charters Guadalupe Cage Diving at 7:17 AM