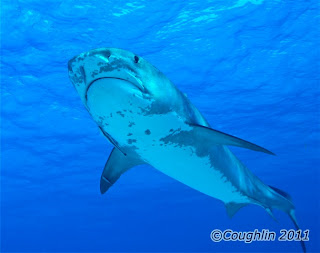 Three tiger sharks tagged off  the coast of Grand Cayman as part of a collaborative research project have returned to local waters after almost a year travelling around the Caribbean. Although Tina was last tracked off the coast of Jamaica, Coco is in the deep water off Grand Cayman at present and Luiza, who was last heard of off Honduras – Nicaragua in the summer, has come home for a visit and officials are watching to see when she will leave again on her voyage around the Caribbean. The three sharks were given satellite tags as part of an extensive survey of the sharks around the Cayman Islands, which has revealed information on what species there are and some of the threats to Cayman’s large marine animals.


The project is a joint effort between the Department of Environment (DoE), Marine Conservation International (MCI), the Guy Harvey Research Institute (GHRI) at Nova Southeastern University and the Save Our Seas Foundation.

Studies elsewhere have shown that where large sharks have been fished out, the resulting catch of desirable fish for the fishers has drastically changed and reduced in species and numbers. The current study will provide information on the situation in the Cayman Islands and help to prevent such a disastrous situation for our waters.

The long migration paths of the three tigers show the sharks use a large part of the Caribbean Sea. Dr Mauvis Gore from Marine Conservation International said the tracks show the extensive areas that the tiger sharks need to patrol for food and in turn help to keep a balance in the seas.

Despite their precarious situation, there is no law to protect sharks in Cayman waters but hopes for the species have been raised in the region following the ban on shark fishing by Belize, Mexico, St Maarten, Honduras and the Bahamas. Timothy Austin, Deputy Director of the DoE, welcomed the ban by neighbouring countries.  “This will give a boost to the health of the marine environment for the Caribbean,” he said.

A boost to shark conservation has also come from the Cayman Islands Brewery, which is donating five cents to the project from the sale of every can of its new award winning White Tip lager.

You can watch the Tiger tracks here.

Posted by Horizon Charters Guadalupe Cage Diving at 7:19 AM