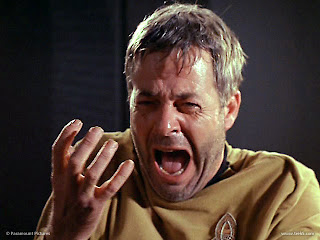 If you're a Trek Fan, and who isn't, you'll note the sad passing of one of the franchises most beloved episode characters, Commodore Decker in The Doomsday Machine 1967.

William Windom gave an outstanding Trek performance in his role as the emotionally wrecked Commodore channeling his inner Captain Ahab to kill "The Mechanical Devil" on board the USS Constellation.

It was a role that left William Shatner the consummate and undisputed king of "over-the-top" acting in an unusual acting space, that of second banana.

Television lost a lion yesterday, but thanks to You Tube we'll always have his roar. Enjoy:

About Shark Diver. As a global leader in commercial shark diving and conservation initiatives Shark Diver has spent the past decade engaged for sharks around the world. Our blog highlights all aspects of both of these dynamic and shifting worlds. You can reach us directly at sharkcrew@gmail.com.
Posted by Horizon Charters Guadalupe Cage Diving at 6:43 AM