How do we identify the Great White Sharks?

We have over 370 individual Great White Shark identified at Guadalupe Island. The Marine Conservation Science Institute has been keeping track of these awesome animals since 2001.

Lets look at what makes these unique and the methods we use to identify them. The first thing we determine is the sex of the sharks. Male sharks have claspers and Females don't.

Once we know the sex of the shark, we look at the pattern of the transition from the white belly to the grey top. This transition is like a fingerprint. We primarily look at 3 different areas of the Shark. The gills, pelvic area, and the tail.

Lets look at this picture of a Great White Shark and identify it.

First we need to determine the sex of the shark. So lets take a closer look at the pelvic area. We can see that there are no claspers, so it is a female.

Now that we know that is a female, we look through our database and try to match up the color pattern to the females we have in our database.

I think we found a match #262, Deb, looks like a perfect match. What if we are not convinced? In that case we look at another area. How about the gills?

As you can see, the color pattern on the gills matches as well, so we have a confirmed match. The shark in our picture is #262 "Deb"

Aside from the color pattern, we also look for mutilations. We have previously talked about the amazing healing ability of our sharks here, so we have to be careful to not use regular injuries as a sole means of identification. Here is a picture of"Bruce" with a big bite from another shark. 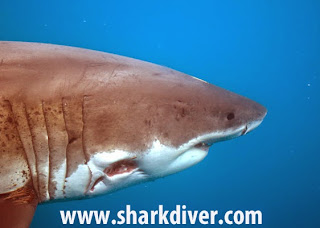 Just a year later, he barely showed any sign of that injury.

Unlike flesh-wounds, mutilations are permanent. We have many sharks that have some unique mutilations, like the famous "Lucy" with her mangled tail.

However, even with mutilations we have to be careful. There are multiple sharks who may have similar mutilations, so we still have to make sure that we positively identify those sharks. At Guadalupe, "Andy", "Chugey", "Tzitzimitl", and "Cori B" all have the top of their tail missing 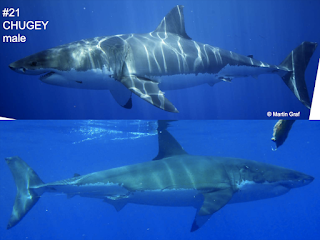 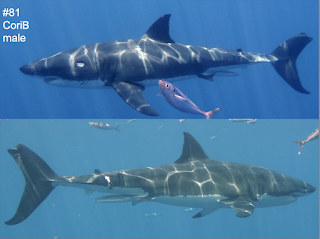 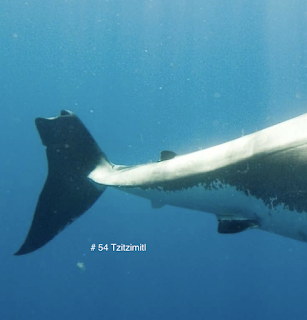 There are other mutilations, like missing pieces of a pectoral, pelvic, or dorsal fin that can all be used as a preliminary identification, but like mentioned above, it's never a sole means and always has to be confirmed by looking at the color pattern.

Many people, especially on social media are using "birth marks", black spots on typically the white belly of the shark, to identify the sharks. Those are actually not birth marks at all, but rather copepods, a parasite that can move around and may disappear from a shark, so they are not a good way to identify our sharks.

All of our divers receive a copy of the entire Photo ID Database witch contains every shark we have identified at Guadalupe Island. 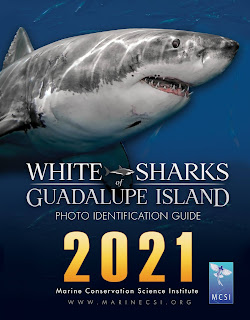 Now that you know how to identify the sharks, you are ready to come shark diving with us. How great will it be when you watch "Shark Week" the next time and you're able to say "this is the shark that swam right by me". Our goal is not to simply get you face to face with Great White Sharks, but to also share everything we know about all the individual sharks we encounter. Some individuals we have known for 21 years and watched the grow from "little" 12 footers to well over 16 feet.

Some of our trips are hosted by Nicole Nasby-Lucaas, the scientist who keeps the database, where she shares her vast knowledge from years of researching Guadalupe's Great White Sharks with our divers.

Call us at 619.887.4275 or email crew@sharkdiver.com for more information on our expeditions.