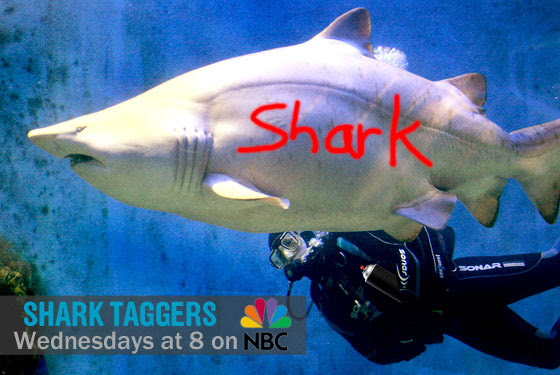 NBC's latest reality based show on primetime, not Discovery, called Shark Taggers. For those of you who missed the synopsis from earlier on in the week here it is again:

Lost in all the excitement over the mysterious The Office spinoff (which is, for now, titled The Office Spinoff) were two equally tantalizing additions to NBC’s 2008–2009 lineup, announced earlier this week: America’s Toughest Jobs and Shark Taggers, both from producer Thom Beers and his Original Productions.

You may know Beers as the man who’s building a mini-empire based on dangerous-job reality shows, such as Deadliest Catch (about the perils of deep-sea fishing) on Discovery and Ice Road Truckers (about the perils of driving trucks on icy roads) on the History Channel. Back in December, Beers signed an interesting deal with NBC during the writers' strike, which essentially guaranteed him two one-hour blocks of programming a week.

And now he’s delivered: America’s Toughest Jobs will be like Deadliest Catch: The Home Game, in which twelve regular Americans compete while performing the world’s most dangerous occupations, from oil-drilling to logging. Shark Taggers is about, well, people who tag sharks; specifically, marine biologists studying shark attacks (cool!) and migration patterns (okay!). We’re not sure this is actually a dangerous job, but tagging sharks certainly sounds dangerous. And Beers has an undeniable talent for wringing maximum drama from America’s occupations, as evidenced by Lobster Wars, a series in production for Discovery about lobster-fishing off the coast of New England, and Verminators (also for Discovery), which follows an “elite team of pest busters to the front lines of their never-ending battle against infestations of all kinds.”

Personally, we’ll be rooting for all these shows, especially because, if Shark Taggers is a hit, it should clear the way (Brushcutters! Coming in 2010 from NBC!) for future Beers-NBC collaborations, such as Hornet-Nest Jostlers (“nature’s deadliest buzz”); Lawn Jockeys (“tackling America’s unsightliest yards — while riding just inches above three spinning blades of death”); and Grizzly-Bear Barbers (Short, back and sides? Or death?). —Adam Sternbergh

O.K Adam, we'll invite you to Isla Guadalupe to spend a night with the local fishermen in the "Love Shack" then you can tell us how dangerous shark tagging really is!

Posted by Horizon Charters Guadalupe Cage Diving at 6:47 AM