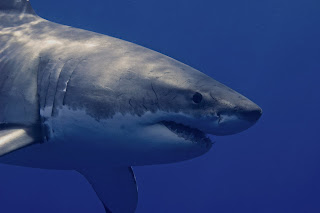 The 10 passengers and nine crew members onboard were flung into the water when the boat capsized under the wave. Nearby boats rescued 16 people who were taken to a hospital with minor injuries, officials said.

The two Americans and one Norwegian were pronounced dead at the scene, said the head of the Great White Shark Protection Foundation, Mariette Hopley.

The accident happened in Gansbaai, which calls itself the Great White capital of the world because its waters are teeming with sharks. The small town, about two hours from Cape Town, attracts thousands of tourists each year who are lowered into the water in metal cages to view the sharks.

Hopley said the boat had just anchored around 10 a.m. and was preparing to lower the first cage into the water when the freak wave hit. She said there were no sharks in the immediate vicinity at the time.

She said it was the first accident since the advent of shark cage diving in Gansbaai in 1991.

Posted by Horizon Charters Guadalupe Cage Diving at 7:56 AM

Actually, the boat had just finished doing a shark dive, and were getting ready to go back to shore. There were plenty of sharks in the water, according to our daughter who was a volunteer on the boat.

Absolute tragedy. Glad to hear your daughter is alive and well.

We have often spoken about a "Hail Mary" at Isla Guadalupe if the ship ever sprung a leak with that many sharks in the water.

I am sure as time moves on the details will come forward. if you have a first hand story from her side and you would like to post it here we'll give you the space.

My brother in law and his best friend were the two Americans on the boat that drowned.

Any information would be most appreciated.

My poor sister learned about this via the internet and it was later confirmed by officials.

We are very sorry for your loss.

Right now details are very slim, it seems that there's a lock on solid information at this point.

With these things you need to wait a few days until things clear, check with us again as tips roll in we'll post them.

Everyone has been so helpful, and while we know intellectually that more will come out over the next few days, it is the nature of this terrible tragedy that makes us want to know why? Why Chris? Why Casey? and Why Kenneth?

The news media in San Francisco got wind of the story and interviewed Sarah. http://www.nbc11.com/news/15875624/detail.html?dl=mainclick