Shark Diving and Feeding Raises Concerns, for Sharks and Divers 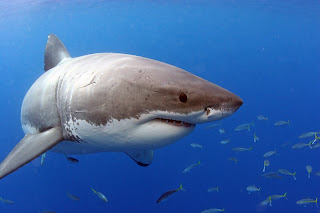 Voice of America recently tackled the open debate about shark diving and it's effects.

Sadly the piece, aired last week, is just a standard regurgitation of what has come many times before.

When tackling the complex issue of wild animal encounters-it would seem the media is less interested in fact finding and more interested in "commonly held shark notions".

Most of these "notions" are out of date and out of touch and not substantiated by any science or on site observations at all.

Here's the point. Operations like Rodney Fox in Australia have actually supported research to answer the burning question of "habituation" of white sharks to chum. It was a great project and yes there's actually an answer to that question now, we'll let the Foxes tell the world when they are ready.

This is how our industry will counter far flung and unsubstantiated claims about sharks and shark diving. In the end shark diving does change perceptions of sharks to thousands each and every year.

In the end, and in the final summation, research to answer basic questions about sharks and shark diving will not only help the industry along, but it will provide those on the outside with a broader understanding of what we do and what these animals are doing there as well.

Media, instead of just reaching for the same old tired comments about an industry that, beside itself, has managed to introduce thousands of people, safely, to a wild predator that needs our help as much as any other wild animal in today's oceans.

Food for thought.
Posted by Horizon Charters Guadalupe Cage Diving at 10:52 AM