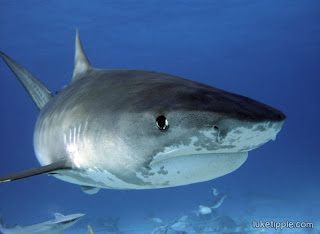 Sometimes the news we get here is news you never want to hear.

Last week a fly fishermen from the USA seeking a trophy catch deliberately hooked and killed a 15 foot Tiger Shark and brought it back to a marina for a weigh in.

Those on site who witnessed the event say the animal weighed in at 1200 pounds, and when cut open, revealed a few full term pups, one of which was put into the marina and as of last week was still seen "swimming around".

This report was confirmed by speaking with the marina manger "Peter" this morning who also added that "the same vessel was at the marina last year and caught another shark of similar size".

The crew of Shark Diver are distressed to hear of any gravid animals harvested for sport, especially coming from Tiger Beach where fishing for Tigers is like shooting fish in a barrel. We would like to propose legislation for this site to protect these animals in Bahamian waters.

Perhaps it's time for those within our community who have spent the past few months attacking Bahamian dive operations over the recent Shear Water Affair to re-focus on more pressing issues like this one.

It's a big step in leadership, let's see if anyone is up for it?
Posted by Horizon Charters Guadalupe Cage Diving at 12:15 PM

I thought foreigners are not allowed to fish in the Bahamas unless they had a special permit. I simply cannot imagine that the Bahamian authorities would tolerate such rogue behavior from insensitive macho rednecks who mindlessly destroy the world's best shark diving.

please excuse my language, but that fisherman is a piece of shit - how would he like it if I came over to HIS house, and gutted his wife? Bastard. The world is hopelessly full of IDIOTS!
I think I'll go out and hook some fishermen......

Thanks for the comments. It would seem that Tiger Beach and the surrounding area is now attracting the kind of attention that no one wants to see out there.

Positive change is needed. The Shark Park idea is juts one way to deal with this.

Would be nice to see some of the rabid voices from the previous weeks get on this and have a good chew.

If I was a betting man (and who isn't in the dive world?) I would say that they will stand on the side lines and do nothing. It's always easier to take things apart than build anything up.

At least we can always count on old Wolf!

Where are all the photographers who signed those petitions, where is the Wet Pixel crowd who cared so much about shark diving in the Bahamas?

Seems that unless they are making money on the deal or have a film to push they are not interested in the death of a pregnant female tiger.

Not one petition, not one phone call, not one person. Amazing, and now I know why sharks are doomed.

So much for the shark diving industry.

Let me set something for the record here. Wetpixel's involvement in the entire Shear Water mess was to change the subject away from the Cease and Desist order Jimmy was ignoring from the BDA and into attacking anyone and everyone who would point out the obvious.

The diver was killed by a shark, after the operation in question was warned specifically about chumming for sharks without a cage system. Period.

Wetpixel's Eric Cheng also had an investment in the doco Shark Angels shot with Jimmy a few weeks prior to the attack. Ironically Eric's film was trying to dispel what he feels is a myth. That big sharks are dangerous. So much for that.

I have watched on the sidelines as this thing played out and yes after that female Tiger was killed it would have been credible and right for anyone to speak out but no one did.

Not the Shark Savers

Not one person on any of the petitions

There were two tragedies this year in the Bahamas. Unfortunately and thanks to some seriously misguided people, the world only heard about one of them.