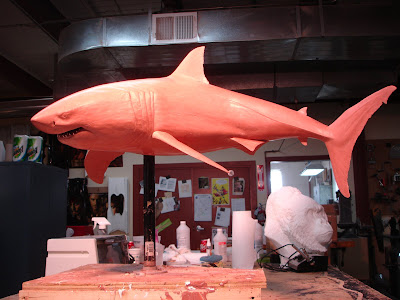 Shark diver Bill Wieger joined us a few years ago at Isla Guadalupe.

At the time he was fresh face in another week long batch of excited divers we see each season, but we quickly came to know Bill as an artist.

On his first expedition to I.G he was introduced to a simply stunning female shark we named "Mystery" for her ability to just appear when she wanted to and vanish just as quickly.

As you know by now the I.G site is known for 100 foot visibility-so that's a pretty neat trick considering this animal is simply huge.

Bill went home and reproduced "Mystery" as a sculpture and now produces limited editions for interested divers and shark fans worldwide. As you can see from this image, he's got talent!

Right about now about 20% of you have your credit card out and we're pretty sure he will not mind if we post his email for interested buyers: billwieger@att.net

Posted by Horizon Charters Guadalupe Cage Diving at 10:47 AM

Beautious :)
Looks like Bill's got an online shop too. **chrisdixonstudios.com/bwgallery/wildlife.htm
I added the link w/o the w3 to see if it might post... if not, well ya'll know how to use the Google ;)

Thanks M4 for the update we have now updated the Blog.