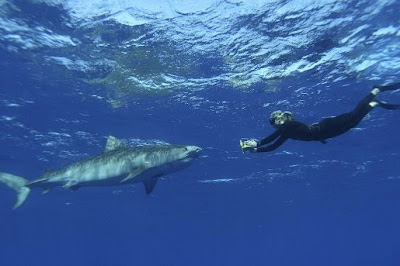 Shark Conspiracies’ host Kevin Harris is a 10 year veteran reporter who has jumped into the wild world of sharks, shark attacks and commercial shark diving with his monthly Pod Cast.

Depending on who you speak with Shark Conspiracies is alternately the work of the Devil himself, or a seasoned look into the soft underbelly of peoples shifting perception of sharks, shark diving, and shark attacks.

We're on the fence with Kevin Harris. He does take an unflinching look at our industry and often comes to conclusions that we agree with. We also disagree on many things. One thing is for sure-his voice-like it or not is needed as a counterpoint and topic starter for many of the debates that need to be had about humans and sharks.

An industry is only an industry when people discuss views, organize, and debate topics affecting that them. Kevin Harris provides the starting point for many of those debates for the commercial shark diving industry.