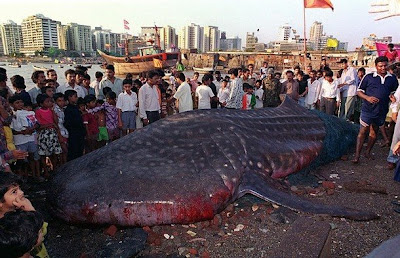 How do you go from this image to sustainable shark tourism in India?

For many, India is a lost cause, but for a few it's fertile grounds to begin conservation on the street level with local fishermen by re-tasking them in ways that bring them closer to sustainable practices.

Whale sharks have long been know as "instant shark tourism" hopefully this program will lead to the inevitable next steps:

The Wildlife Trust of India (WTI) in collaboration with the state Forests and Environment Department and the National Institute of Oceanography (NIO) of Goa will conduct the five-year research to study whale shark habitat, map their migration, various aspects of their life cycles and genetic patterns.

With the commitment shown by the local fishing community for whale shark conservation in the coastal region of Saurasthra, a group of fishermen will be specially trained for project.The research, which also includes the study of the coral reef along the Gujarat coastline, is being funded by the Jamnagar-based Tata Chemicals Limited.

Marine biodiversity expert from NIO, M Wafar, who is part of the core team of scientists for the project, said, "We will be training the local fishermen to collect samples from underneath the sea. They will also be taught how to click photographs of whale sharks using underwater cameras.

Posted by Horizon Charters Guadalupe Cage Diving at 7:52 AM