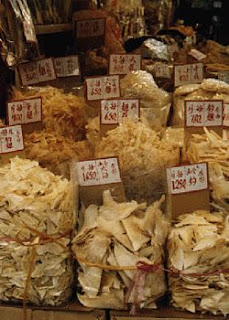 After months of bad news about sharks, along comes this mornings in-depth and quite frankly astonishing coverage of Taiwans sharks fin trade by CNN's-Lisa Ling and Peter Knights of WildAid

The "Planet in Peril" crew traveled with Knights to Taiwan's southern port city of Kaohsiung, which is considered one of the world's main hubs for shark fins. We watched as the fishermen unloaded their catch. Thousands of fins were thrown from one of the ships that had spent months fishing the international waters of the Pacific.

Real and lasting conservation media starts with credible sources and ends with in depth reporting like this. Kudo's to the entire team who put this together, from the video crew to the line producers, this is first rate NGO work and first rate television/media.
Posted by Horizon Charters Guadalupe Cage Diving at 11:42 AM

Let’s make sure CNN and WildAid get nominated, and win whatever Shark Conservation award we can dish out!

When does Planet in Peril air on TV. I would like to watch this.

Not sure check your local listings I know you can buy the show as a boxed set.

Planet in Peril is scheduled to run tonight (Thursday, Dec. 11th), according to CNN (see my posting: http://rtseablog.blogspot.com/2008/11/cnns-planet-in-peril-discusses-on-shark.html).

If you were interested in that Planet in Peril episode then I strongly suggest that you watch the film Shark Water which is a full length fascinating film about shark finning.