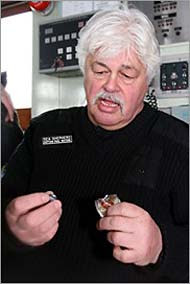 How can anyone take the stumbling and ineffective antics of Sea Shepherd seriously when titular head of organization Paul Watson lies so badly that a monkey, encased in ice, and shot into deep space could see through them.

Not that we condone the shooting monkeys into deep space. We just find the visual image amusing.

Yes, we're talking about the "shot that never was" wherein Paul Watson entirely fabricated a shooting of his grand personage for a film crew and reality television show called Whale Wars.

Why are we talking about it again? Here's an excerpt from Watsons latest blog post, transmitted to the planet as religious eco gospel and regurgitated by many well meaning bloggers and eco websites who have yet look into the core of Sea Shepherd:

"The Union that supplies the crew for the whaling ships is a Yakusa controlled Union. I've been making that charge for years without a single denial from the Union, the whalers or anyone else. The only defense for that charge is to ignore it with the hope it goes away or to assassinate the person making the charge which is exactly what they tried to do last season when someone on the Nisshin Maru shot me."

Once again Paul Watson is repeating his obese assassination fabrication of 2008. A lie that was quickly dispelled by those who know weapons, shooting, and the impossibility of the shot that Watson claims almost took his miserably fabricated life.

Not even the producers of Whale Wars believe Watsons attempted assassination claim and have quietly backed away from admitting that this entire event was indeed staged.

We need credible witnesses to the ongoing whaling efforts of Japan. Sea Shepherd lies so continually that no one, not even Watson, has a grasp on what is the truth anymore. The original lie was bad enough, repeating the lie over and over again reveals a pathological psychosis that is disturbing. Made worse by the fact this man is the captain of a vessel and in charge of others lives in an unforgiving ocean.

Is this what you want from your conservation organization?
Posted by Horizon Charters Guadalupe Cage Diving at 6:13 PM

So, it's ok for the Japs to lie; ok for their paid flunky in NZ to lie - sorry - 'spin' - not seeing too much vitriol against them! How does one man and a small organisation fight a country and its government with all the monetary pull it has? Brilliantly! Paul Watson has done much for the creatures on this earth - what have you done in the last 40 years?

Having read some more of your crusade against SS and Paul Watson, it seems perfectly obvous to me that there's more to your tirades and you have a personal beef. It's not just about the whales, and your bigotry is harmful to the much good this society and its many unpaid supporters do worldwide - for all marine creatures - including and importantly - sharks. What's wrong - didn't they give you a part in Sharkwater?

Of all your accusations there is not one iota of credible evidence defending your point of view that Paul was lying about the bullet.If you are going to speculate, please give us some evidence in support of your perspective. The sad part is that society is now accustomed to not requiring supportive evidence for opinions and not holding people accountable for inaccurate statements. Our media outlets and our government is overrun with this cancer.If only we could paint the floors of Congress with rancid butter. The Japanese Coast Guard is not legally allowed to be on board of the "research" vessels. The Japanese crew is not allowed to be refueling either and I have not been able to find one product of this whaling "research" available for public viewing.Your link from the 'shot that never was' poses the question, 'why would the Japanese risk everything to kill Paul Watson'? What exactly is the risk they would be taking as there is no authority in the world that has the gall to attempt intervention? The Japanese know they won't be held liable - they have been getting away with illegal whaling for years and the world watches, briefly sympathizes with the cause and then changes the channel.

Seems the hardcore SS Groupies have crawled from the woodwork so we'll answer you as a group.

Is this a crusade? No, this is reality fact checking 101.

Are we being "bigots" for poking out the increasingly flawed underbelly of your beloved organization? No.

We were once like you, Sea Shepherd fans, donors and everything, check our early blog posts. Until Watson fabricated The Shot, and then continued to lie about it.

We had been growing suspicious, wondering if our hard earned money was really being well spent and then that block buster from Watson. It was the green curtain with the Wizard of Oz moment for us. Behind the grand facade was a tired little man who had run out of ideas and animals were still dying. Ouch!

What's that you say, "the ends justify the means?"

Running out of ideas Watson and company now resort to making up and fabricating storylines for the producers of Whale Wars and you. That shot was part of the show, not even the producers will back it up now. Go ask, dig a little, we double dog dare you.

It's tragic and your money and devotion is best spent elsewhere.

DEMAND metrics and results with SS, if you are going to support any conservation organization ensure they get the job done.

Anyone can go out and become a non profit and ask for money, in fact every single day another eco group pops up asking for donations to "raise awareness" that's code for "we will take your money and send out some flyers".

Sea Shepherds mandate is to stop whaling. We wish them luck with that, but we will not stand idly by as they lie their way onto the conservation scene and boorishly demand respect for floundering around in the Southern Ocean doing little to actually stop whaling.

Yes, you read the SS press release that says they saved 50 whales, or 60...but like the faked shot, can you believe them?

If you are unwilling to take your eco organization to task, you allow the rot to set in. By way of your slavish unquestioning devotion to Sea Shepherd you are helping to kill it. They have lost their way and you are cheering them on.

In the meantime, my little SS Groupies, we'll be here to point out the next incomprehensible media stunt Watson pulls from his Wizards Hat and presents to the planet with a flourish.

About the only thing we'll ever agree on is the need to stop whaling.

Actually, the Japanese themselves have admitted that Sea Shepherd's presence in the Southern Ocean has hampered their efforts to meet whaling quotas.

Still an SS apologist? Damn you sir, damn you to hell;)

How's the blog coming along, you basically got handed the shark world on the plate with Vic Hislop this month.

I am not sure how that man continues to drink his "case of beer a day" with his foot crammed into his mouth like that.

Must be a straw.

Pretty obvious that shot was a complete fake even to the SSCS apologists.

It's simply amazing to me to see how many toady sites go for this stuff.

I had thought people were smarter.

Turns out they are idiots or selling something or both. Whale Wars?

Even with the kevlar vest and badge a bullet's impact would be like a man punching you in the chest. It would knock you back, maybe just a step, and leave a bruise. Watson only had a prick from his badge to show from it. In other words it was badly faked.

If he had done the exact same thing, ran into an object to cause bruising in the area and pretended to recoil before 'being shot' it would lend some more credance to the idea he was shot. Oh, and handing over the bullet and badge to officials for verification.