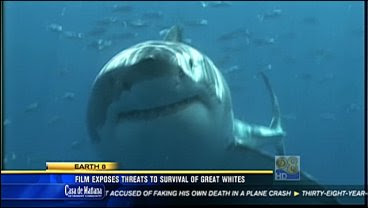 Two hundred miles (click link for video) south of San Diego, there's a place where divers come face-to-face with the ocean's fiercest predator - great white sharks. A Southern California filmmaker is on a mission to bring them to the big screen, and Birch Aquarium at Scripps featured his award-winning documentary "Island of the Great White Shark".

He has a love for the ocean and fascination with great white sharks. It explains why filmmaker Richard Theiss would spend countless hours in chilly water to bring these feared giants to your living room.

"I've been filming for 5 years now and never seen aggression either towards divers in cage or myself," Richard said.

He traveled 200 miles south of San Diego to Guadalupe Island, about 150 miles off the coast of Baja. It's a place shark enthusiasts love to go to catch a glimpse of the great white from a cage underwater.

"I wanted to present a realistic portrait of these animals, but also wanted to show working relationship between eco-tourism boats, the shark diving boats and the Mexican researchers that are there... why have they chosen Isla Guadalupe," he said.

You can see the source of food here is one major attraction for the sharks. But researchers have yet to answer many questions about shark behavior, which is why shark tagging is used to collect information. Richard's film not only shows this warm-blooded creature in motion, but acts as a tool to bring science and public interest together.

"People have always said the great white shark has this black eye, well it's not completely black. You can actually see its pupil and as he goes by I can see him tracking and looking at me. You feel a momentary connection. I see you, you see me," he said.

It's that connection that Richard wants people to make before it's too late. Conservation is one of the leading messages in his documentary.

"We're losing up to 100 million sharks a year, primarily to feed the Asian demand for shark fin soup and other shark products in these Asian countries," he said.

Richard hopes "Island of the Great White Shark" will give people a better appreciation for the fight sharks face every day to survive.

"We are not on their menu, that we don't need to fear these animals. They certainly are top predators and have an important role in marine ecosystems and we need them, but we should not necessarily fear them or fear putting our toe in the water," Richard said.