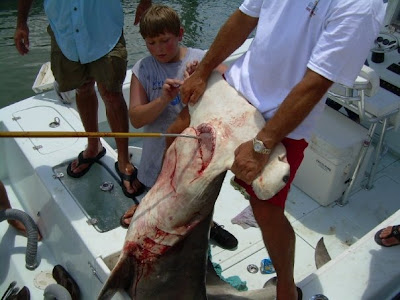 SFMI is currently working in three regions in the USA, the Bahamas and in Fiji to enact shark conservation change. That change will ultimately save sharks:

Shark fishing tournaments are a primal spectacle and tourist attraction that play on our innate awe of the “monster fish.” However, as more is learned about the imminent demise of many shark species, a more educated public is starting to emerge.

Destin’s Shark Saturdays is one such example of questionable promotion.

The event, scheduled for October, is actually four individual Saturdays which are part of a month-long fishing tournament. Helen Donaldson, the event’s executive director, states the purpose of the event is to “get more people fishing in Destin,” and here’s where the real problem lies.

While a shark being brought to the docks is unquestionably a crowd pleaser, the public is becoming more aware that they are witness to the decline of an already threatened species. Take for example, the Rodeo record-breaking mako that the event caught in 2007, which attracted criticism from around the world. According to event organizers the targeted species include bull sharks, hammerheads and tiger sharks, all of which appear on the International Union for Conservation of Nature’s threatened species list.

The United States does not currently have any shark species listed as “endangered,” however, to be declared ‘threatened’ a species must be in danger of imminent population decline.

While recreational shark fishing regulations do exist, they are tough to monitor and therefore seldom enforced. If the objective of Shark Saturdays is to increase the number of people fishing for “threatened” species, then we have to ask the obvious question: Should we really be promoting species eradication?

Somewhere along the line, there has to be a change in how we view the ocean and the animals that make up a healthy ecosystem.

Specifically targeting breeding-age sharks for slaughter is ecologically unsafe. This action contributes significantly to overall population decline as competitors inevitably wait to catch the largest sharks, which are usually female and quite often pregnant.

Despite all this, the industry and economy of shark fishing tournaments cannot be ignored.

So what is the solution?

Our new resource management group believes we have the answer.

The Shark-Free Marina Initiative was established as an answer to the culture of “mature shark harvests.”

There is nothing wrong with catch and release shark fishing. When proper standards are followed, the animal can be released back into the breeding population. Fishermen can still enjoy the thrill of the hunt and be rewarded for their catch.

All it takes is for officials to switch their reward structure from weighing the animal, to measuring the animal in the water.

Shark-free Marinas promises to reduce worldwide shark mortality by prohibiting fishermen from bringing dead sharks to the dock. Instead they aim to work with marinas and fishing groups to develop events that will draw a crowd but don’t allow the mortal take of these “threatened” species.

Points and prizes will be awarded for sharks tagged, measured and released while the crowd remain entertained on the docks by interactive attractions and the usual fare that accompanies these events.

Already the SFMI is gaining supporters, and they are currently working with events such as the “Are You Man Enough?” fishing tournament to set a new standard in fishing competition. SFMI commends the Destin Fishing Rodeo for their shark tagging division but questions the sense in killing these animals for the top awarded prize of a mere $250.

All we are talking about is sensible management of ocean resources — particularly in relation to sharks.

It’s time that we drop the “Jaws” rhetoric and accept that we need these animals in the ocean. Events such as Shark Saturday make money by killing dwindling populations of sharks, and this kind of "family" event just perpetuates this culture in the kids who should be taught environmental responsibility.

With a little restructuring, we can help tournament organizers create a positive community event while still entertaining their hard core fishing audience.

Visit the Shark-Free Marinas website at www.sharkfreemarinas.com for more information.

Luke Tipple is Director of the Shark-Free Marina Initiative

Posted by Horizon Charters Guadalupe Cage Diving at 6:45 AM