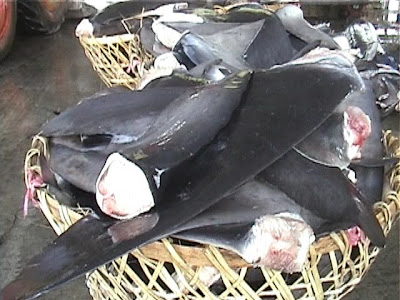 Smart direct action protests begin with indigenous populations. The issue of sharks fin soup has been a tricky one with the perception of Westerns trying to influence a primarily Asian cultural issue.

Asians, for good reason, are resistant to heavy handed direct action eco push by outsiders. A fact many within the Western shark conservation community have discovered first hand over the years.

So, how do you change destructive indigenous cultural practices?

The IUCN has an idea, protesting and messaging with local populations:

"Lured by high profits, fishermen kill sharks only for their fins. They cut off shark's fins and dump the sharks into the sea and let them bleed to death," said Wang Yu-min, director of the Environment & Animal Society of Taiwan. "Each year, some 4,000 to 7,000 sharks are killed for their fins. The International Union for Conservation of Nature warned that 111 species of shark are being threatened, of which 20 species are seriously threatened and 25 species face
extinction," she said.