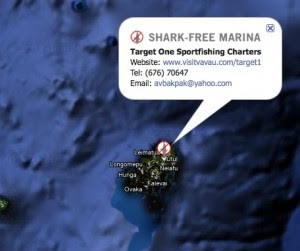 The first of what will undoubtedly be many Shark Free Marinas in Tonga came to fruition this month thanks with the help of "interested parties" in the region. Mike over at BAD in Fiji has the scoop:

They have graciously agreed to act as trailblazers and are now the Kingdom of Tonga's first Shark Free game fishing operators. This is far from being trivial as contrary to many Fijians, Tongans hunt and eat Sharks and will thus regard any attempt at sparing their life as a wasteful and incomprehensible act of utter Palangi foolishness.

In the big scheme of things, this will again turn out to be a wise business decision - like everything the Gros' have done so far.

They are among the original pioneers of tourism in Vava'u and have struck gold on practically every one of their ventures. On the accommodation front, they operate one of the first, and still the only clean and reliable backpacker hostel, Adventure Backpackers and are the developers of Mystic Sands, one of only two beachfront resorts on the main islands. Sandra and Kiwi Magic's Pat also operate the only reliable and highly successful agency for holiday homes in Vava'u, Vava'u Holiday Homes and provide access to reliable and trustworthy local help through their Vava'u Property Services.

Yes, I did indeed stress the term reliable, and for good reason! Whatever your provenience and intentions: nowhere does caveat emptor (and I'm not only talking in terms of legal transactions!) apply more than in the Friendly Kingdom- and I'll leave it at that!

Henk himself is the quintessential factotum and provided that he likes the project, you can avail yourself of his expertise for anything from building your next home (he did build mine) or installing a smoker for the most delicious home-smoked Wahoo, all the way to constructing and then successfully deploying a FAD in 1,000-odd fathoms of azure pelagic waters.

But his true love is game fishing and his Target One Sportfishing Charters is one of the most successful (and reliable!) such ventures in the whole of the Kingdom.

Vava'u prides itself on some of the most pristine fishing grounds in the whole of the South Pacific and anglers flock there from all over the globe to try their skills against good sized Sails, feisty (but generally, rather small) Blues, Wahoo, Mahi Mahi and in season, great numbers of migratory Yellowfin. This is also the place where one can still experience important numbers of pelagic Sharks, be it Silkies, Bronzies and even elusive Oceanic Whitetips.

Until very recently and much to the joy of the locals and the chagrin of the environmentalists, all fish caught in Vava'u were being landed and consumed, this largely regardless of species, season and size.

But progress being inevitable, more and more enlightened customers have been asking that the Billfishes be tagged and released and even the most backward operators had to grudgingly abide, to the point where the last national tournament was held under that formula - and won by none other than Henk and his Target One!

This is hopefully yet another step in the right direction.

After Palau's epic declaration and Fiji's simply mind-blowing performance, Tonga is hopefully on its way to becoming yet another Pacific island nation that fully embraces the concept that Shark conservation is not only essential for the health of the marine ecosystem but constitutes great tourism marketing on top of that!

Fingers crossed that after Target One, many more game fishermen in Vava'u will see the light and embrace the Shark Free Marinas Initiative!