At the start line - Tracking sharks 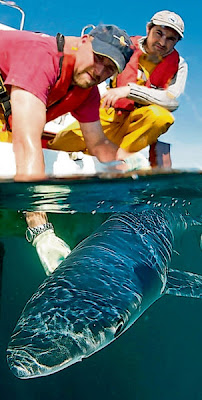 Off the coast of Ireland Blue sharks (Prionace glauca) come under scrutiny:

THE ODYSSEY undertaken by two female blue sharks from Irish waters around the north Atlantic this winter is being tracked by University College Cork (UCC) scientists, following a successful tagging project off the south coast.

The two sharks were named Granuaile and Queen Méabh by the UCC team during the encounter off Cork’s Old Head of Kinsale a week ago.

While blue sharks have been tagged here before, this marks the first satellite-tracking of the fish with archival “pop-up” tags. Such tags detach after a specific time period, having collected and stored data on temperature, depth and light as the sharks migrate.

UCC scientist Dr Tom Doyle of the university’s Coastal and Marine Resources Centre hopes that the two sharks will “capture the imagination of Irish school children” during their voyage and will also raise awareness about the need for conservation.

Dr Doyle, who is an expert in tracking marine species including leatherback sea turtles and oceanic sunfish, says both sharks face a “real challenge to survive and reproduce in the coming years”, as blue sharks were caught for their fins.

Posted by Horizon Charters Guadalupe Cage Diving at 6:31 AM