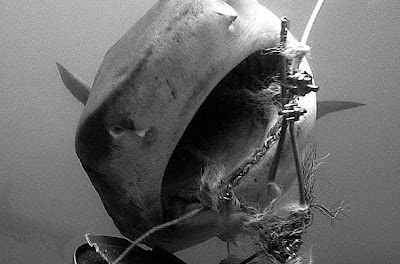 Coming home from a shark shoot in the Bahamas this morning I have been mulling over the series of emails and phone calls that I received over the past few days.

The expected blow back has been heated even by industry standards with counter allegations and straw man defenses put forward by those whose friendships with the SA operator seek grey areas in what is a glaring black and white issue.

After seeing images that Wolfgang “sat on” for many months while he tried to affect SA baiting changes quietly, the response to his expose reveals an industry disconnect that needs to be remedied. Every time a shark is mauled by poor baiting practices, a shark becomes stuck in a cage, a shark is teased into tearing into a baited wetsuit for film and television, or baited into all manner of situations for film and television that further “the vicious shark” scenario - our entire industry is diminished.

We are, supposedly, the industry leaders, the conservationists, the ones who are on the front lines for sharks. So why is it o.k. to allow them to be tangled in ropes, crash into cages, or be filmed in the worst case scenario for productions time and again?

Honest mistakes in any wildlife industry can be tolerated and even understood with industry leaders, but brushed aside, enabled, and even apologized for?

Friendships within our industry are legendary but all too often cloud the greater good.

When websites like the recent STOP Shark Cage Diving SA attract media attention I want to know, as an industry member, that the allegations contained are absolutely false. I want to be certain that we are doing our level best for the sharks on a commercial level.

Changes within any industry are painful but oftentimes necessary. When wildlife is at stake any expose is painful. Wolfgang was not personally attacking anyone with his images; he was trying to effect change. Testifying to what he witnessed firsthand as a potential catalyst. Those who came to the defense of his graphic black and white images of a tangled shark with a bloodied face and missing teeth missed a point, and in turn have diminished their ability to speak effectively on shark conservation issues. Putting friendship ahead of the very thing they profess to care about, the sharks.

You cannot have it both ways. There is no such thing as a Judas Shark in our industry, or at least there never should be.

Every industry negative Shark Week show, You Tube video, still image and media report resonates on for years, affecting our ability to speak for sharks in a credible manner. Better an industry insider take the reins to try and change practices then a main stream media outlet or even a complete industry outsider with an agenda.

How about we consider change for a moment?

What harm would it be for the SA operator to come forward and say “Yes, as frontline resource users who have long advocated for the removal of sharks nets, we will change what we do…for the sharks.”

As a media guy allow me to suggest this course of action would be a huge win and media worthy. SA shark operators modifying shark diving operations to make a broader point about shark conservation and improved animal husbandry in the region.

What harm would come from the media, and the world, understanding that our industry is adaptable, flexible, and has the very best interests of sharks and the environment in mind.

Instead? The last 72 hours has seen a circled wagon mentality, base accusations flying back and forth, and all manner of simian grunting and chest beating under the banner of “mind your own damn business.”

Have we been here before? You bet we have.

Someone even suggested the tangled sharks were the fault of the photographer. Shooting the messenger, in the face of stark and graphic images in this case, is as productive as shooting yourself in the foot revealing the true face of this ugly industry disconnect.

This is not leadership. This is not our industry, and those who saw Wolf’s images and who can find a way to defend them need to take a serious look in the mirror, it is gut check time. We all profess to love sharks but that love for sharks starts at home - with our industry.

For Want of a Few Leaders

Industry leadership is conferred by doing. We cannot self anoint a leadership mantel upon friends and industry cohorts in the hopes the broader community will go along. There is also no grey area when stark black and white images, video or negative media reports about our industry come forward. Real leadership requires those in the crosshairs of either unfortunate circumstance or self inflicted wounds to stand and be counted - to be leaders.

This is one of those moments. So let’s get busy and leave the old school dive industry “I just want a pat on the back at DEMA this year,” garbage behind.

Postscript: Just finished reading an open letter to operators in SA addressing this issue head on. Kudos to the operator in question who initiated this email. Leadership.

Note: This blog has featured the dive site and operator positively in the past. Here, here, here and here .