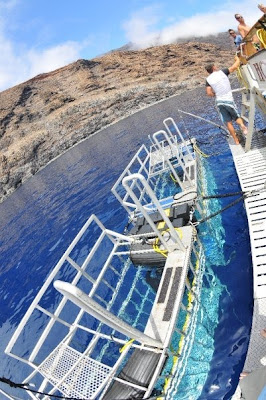 That Travel Chick aka Fort Lauderdale's Amanda joined us at Guadalupe Island in 2010 for the ultimate shark encounter. This is Part Two in her ongoing series diving with great whites and Shark Diver.

We don’t actually leave the dock till well past midnight but it doesn’t really matter since we don’t get to Ensenada Mexico til 830am the next morning to go by customs and such and pick up an observer to make sure we don’t do anything illegal. Hehehehe.. The sleeping on the boat with the rocking was quite calming. I did have a few beers before hand so I was up a few times which isn’t easy when sleeping quarters are downstairs and bathrooms are up and down the back fo the boat. My bunkmate/roommate for the stay is Souxie, a Canadian from Alberta. Such a sweetheart and she was on this trip a year ago so that gives me more confidence as I picked the right vessel to hit my top bucket list item on.

I slept till about 6am. I had gone without sleep for 24+ hours so that still wasn’t enough. Once we left Ensenada though is when the waters started to get rough. I actually had a very large breakfast. Potatoes, pancakes and bacon. Probably not the best Idea I had but I didn’t realize I would get so sea sick. I was better when I was laying down so I skipped lunch and dinner since I didn’t want to bring it up again and slept from 3pm till 5am the next day. Waking up long enough to pee and back to sleep. Boat was rocking sooo much that I nearly rolled off and had to position my feet in the right areas. It was surprisingly comfy though. I did however get to see Blue Whales as we were about an hour or so out of Ensenada. They are pretty common to see there so it was a real treat. Ive never seen Blue Whales just Humpbacks and an Orca.

One of the funniest introductions was with Sue, when the boat rocked and she went flying right into me. I was up against the guard rail. I said “ gee.. buy me a drink first at least” and told her to sign my bruise since it was inevitable. It was a good laugh. She was a good sport. She has such a great laugh too.

Next - Day One White Sharks
Posted by Horizon Charters Guadalupe Cage Diving at 9:35 AM