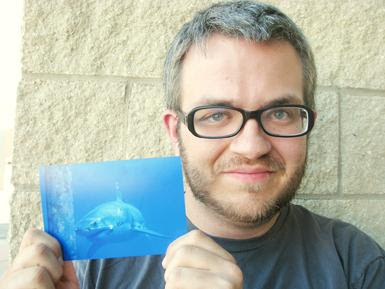 One of the unintended consequences of commercial shark diving done right, are the legions of pro-shark advocates that go out into the world to change hearts and minds about sharks...one media hit at a time.

One of these is newly minted Shark Diver John D Iles, who joined us in 2010 at Isla Guadalupe to meet the great white shark.

John got what he was looking for and became a true shark advocate, in a way that only those who have actually stared into the eyes of a great white can.

This week he appeared in the Star-Herald to talk about his first hand experiences with sharks, shark diving, and the need for conservation.

What upsets Iles more than “Jaws” is the Discovery Channel’s “Shark Week” programming.

“Shark Week is more of an enemy to sharks than ‘Jaws,’” he said. “‘Jaws’ is a movie and a work of fiction. When a supposedly educational network airs ‘Victims’ and ‘Worst Bite,’ it’s making it seem like ‘Jaws’ is true after all.”

Editors Note: Thanks John for the media and thanks for standing up for the sharks, we could use about 100,000 more just like you.