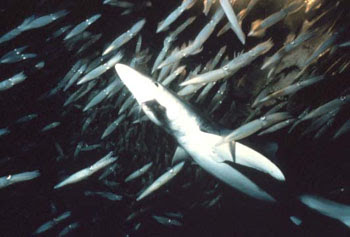 IN THE GULF STREAM, some 300 kilometres off Nova Scotia’s coast, hundreds of thousands of huge blue sharks are slipping under warm waters, rising and falling without fail in a mysterious daily rhythm, as if they were yo-yos on kilometre-long strings.

It’s a dance never before imagined. These massive predators — lions of this oceanic food chain — swimming on the Atlantic’s surface by night and by day, sinking blindly to its inky depths, so far down no light could ever reach them, no creature could ever be seen.

And it’s a winter ritual that has scientists amazed.

"Nobody had any idea they were doing this," Steve Campana, head of the Dartmouth-based shark research team that made the discovery, said in a recent interview.

"We found that all of these sharks are leaving Canadian waters in the late fall and when they swim out, they inevitably run into the Gulf Stream, this giant current of warm water that comes up from the Caribbean. Within a day or two of hitting the Gulf Stream, every single blue shark started this wild diving behaviour whereby they would spend the night up in the surface waters — in the top 30 or 50 feet (nine or 15 metres) — and every day they would spend down in incredible depths, as far as a kilometre below the surface.