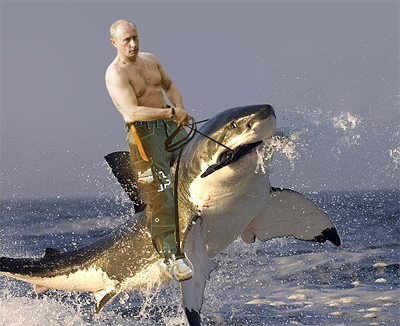 MOSCOW: Vlad is back at it again. Bolstering his macho image, Russian PM Vladimir Putin yesterday wowed onlookers with a dangerous stunt in the Kara Sea.

According to his entourage, Putin reportedly jumped overboard from a guided missile frigate on to a great white shark and proceeded to ride atop it for up to fourteen minutes before diving off.

The Russian PM lassoed a rope around the massive shark and held on tightly before it completely submerged to the horror of Putin’s security entourage.

However, Putin surfaced a few minutes later to the cheers of onlookers who had been taking pictures throughout the entire spectacle.

“Putin is an incredible man,” said a young woman who had been holidaying with her boyfriend on a yacht close to the scene.

“There is nothing he cannot do. I once heard that he stared down an owl in a rain forest. That’s amazing!”

The Prime Minister appeared short of breath but otherwise calm as he greeted Journalists on the shore of the Kiril islands. According to a reporter from Russia’s state ITAR-TASS news agency, Putin then chased down a lion and ate it raw.

Officials could not verify the report, however a member of Putin’s Russia First party did confirm that Putin was known to chase lions.

“It’s a hobby of Mr Putin’s,” he told Breaking News.

Original link, no we had nothing to do with this one.

Posted by Horizon Charters Guadalupe Cage Diving at 8:34 AM