"Holy crap, I've been nominated for an Emmy!" 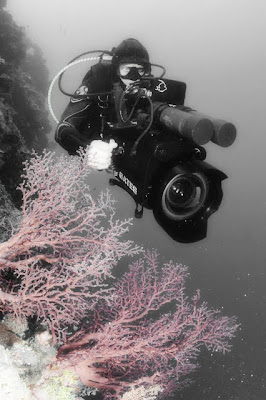 That's the great news coming from iDive Sharks and Mark Thorpe who indeed has been nominated for an Emmy for his underwater work this month.

"Contracted by an independent production entity and along with a great team of other guys we set up camp for ten days living on a limestone rock in the western Pacific to film the daily Migration of the non stinging Jellyfish that call the lake home, all 16 million of them! The resulting footage when edited became the focal piece for the recent Great Migrations series aired on National Geographic, it is for this work on this project that I have recently found out that, along with the rest of the team, I've been nominated for an Emmy award, result!"

Kudos Mark, this nomination could not have happened to a better guy!
Posted by Horizon Charters Guadalupe Cage Diving at 11:05 AM